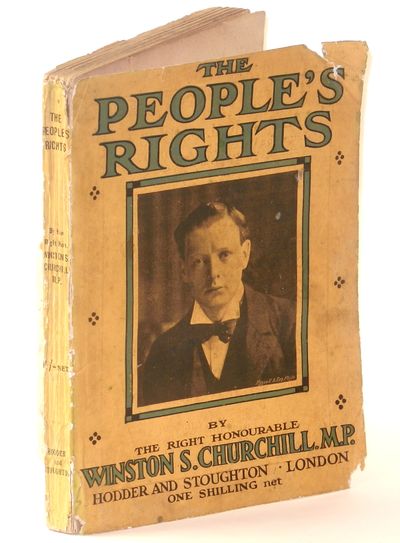 by Winston S. Churchill
London: Hodder and Stoughton, 1910. 1st Edition. Paperback. Very good. This book is from the personal collection of Churchill's bibliographer, Ronald I. Cohen. This is a collector-worthy example of the first edition, first state of this striking, scarce, and fragile early collection of Churchill's speeches. In 1904, Churchill quit the Conservative Party and joined the Liberals, beginning a dynamic chapter in his political career that saw him champion progressive causes and be branded a traitor to his class. In 1910, when The People's Rights was published, Winston Churchill was a powerful political force and a member of the Cabinet. From December 3-11, 1909 Churchill was on the campaign trail on behalf of the Liberals. The People's Rights is a distillation of these nine days of speeches, criticizing the House of Lords (which had rejected the Liberal Government's budget, thus precipitating the campaign) and championing Free Trade, a graduated income tax, luxury tax, and surtaxes on unearned income. Churchill's efforts were not wasted; as a result of the election, the Liberals would achieve a slim majority and passage of their budget. The People's Rights was published in an exceptionally perishable form, in bright yellow-orange paper wraps (with a halftone photo of Churchill on the cover) and printed on cheap, pulp paper. Consequently few copies survive, and wear, losses, and general deterioration are common to those copies that endure. There are two states of this first and only printing. The first state features an Appendix and an Index (at pages 149-152), while the second replaces the Index with a second Appendix. Here is the desirable first edition, first state. Given the inherent fragility of the edition, this copy is in superior condition - notable for being both highly complete and particularly bright. The color, which understandably often dulls, remains vividly bright and uniform on both the covers and spine. The spine remains almost fully intact, with the usual wrinkling from the binding process, but with all lettering fully preserved and only trivial chipping at the spine ends and hinges. Both covers remain attached and the binding remains square. The striking front cover is complete apart from .25 inch losses at the corners. The rear cover is likewise highly complete, with some closed tears, wrinkling, and a little staining at the edges, but with only small, shallow chipping. The contents are browned as usual, but less so than most copies we have seen. The contents are complete with no previous ownership marks and minor spotting confined to the first few pages. Bibliographic reference: Cohen A31.2.a, Woods/ICS A16(aa), Langworth p.97 (Inventory #: 002842)
$3,045.00 add to cart or Buy Direct from
Share this item