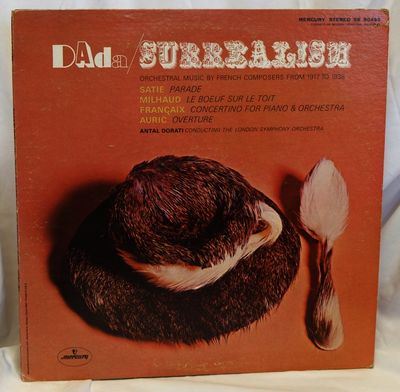 by London Symphony Orchestra, Milhaud, Françaix, Auric, Satie
Chicago: Mercury Record Corporation, 1967. Very Good. Chicago: Mercury Record Corporation, 1967 Very Good London Symphony Orchestra Dada/Surrealism: Orchestral Music by French Composers from 1917 to 1938 Chicago: Mercury Record Corporation, 1967 LP, black vinyl with original sleeve The LP is fine, the sleeve has light rubbing, corner bumping and wear, and a small remainder punch in the upper right corner The London Symphony Orchestra conducted by Antal Doráti Includes “Le Boeuf sur le Toit” by Milhaud, three selections from “Concertino for Piano and Orchestra” by Françaix, “Ouverture” by Auric, and “Parade” by Satie The sleeve features “Object” (the fur cup) by Méret Oppenheim on the cover and an essay by Felix Aprahamian on the verso “In France during the period following World War I and preceding World War II, the art world was in a state of turmoil to say the least Men of letters assembled poems by picking words out of their hats, artists displayed such objects as a flat-iron equipped with protruding tacks or the Mona Lisa complete with moustache, and musicians flaunted symphonic traditions with dance hall tunes Whether these developments, so well characterized by the Dada and Surrealist movements in painting and sculpture, were primarily an expression of the tremendous upheaval caused by World War I or a reaction against previous seriousness—and at times pretension, they effectively neutralized the tyranny of late romanticism and gave artists the freedom to move in new directions The Satie and Milhaud pieces were in the vanguard of this new expression and the Françaix and Auric works prove that their pioneering was not in vain…” (os) (Inventory #: 1053)
$50.00 add to cart Available from Bay Leaf Books
Share this item