On the Pulse of Morning: The Inaugural Poem. 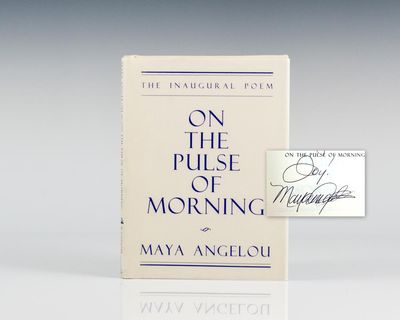 by Angelou, Maya [Bill Clinton]
New York: Random House, 1993. First edition of the poem that Maya Angelou read at the Inauguration of William Jefferson Clinton on January 20, 1993. Small octavo, original cloth. Presentation copy, inscribed by the author on the half-title page, "____ ____ Joy Maya Angelou." Fine in a near fine dust jacket. "On the Pulse of Morning" is a poem by writer and poet Maya Angelou that she read at the first inauguration of President Bill Clinton on January 20, 1993. With her public recitation, Angelou became the second poet in history to read a poem at a presidential inauguration, and the first African American and woman. (Robert Frost was the first inaugural poet, at the 1961 inauguration of John F. Kennedy.) Angelou's audio recording of the poem won the 1994 Grammy Award in the "Best Spoken Word" category, resulting in more fame and recognition for her previous works, and broadening her appeal. The poem's themes are change, inclusion, responsibility, and role of both the President and the citizenry in establishing economic security. Its symbols, references to contemporary issues, and personification of nature has inspired critics to compare "On the Pulse of Morning" with Frost's inaugural poem and with Clinton's inaugural address. It has been called Angelou's "autobiographical poem", and has received mixed reviews. The press praised Clinton's choice of Angelou as inaugural poet, and her "representiveness" of the American people and its president. Critic Mary Jane Lupton said that "Angelou's ultimate greatness will be attributed" to the poem, and that Angelou's "theatrical" performance of it, using skills she learned as an actor and speaker, marked a return to the African-American oral tradition of speakers such as Frederick Douglass, Martin Luther King, Jr. and Malcolm X. (Inventory #: 3972)
$750.00 add to cart or Buy Direct from
Raptis Rare Books
Share this item

New York : Alfred A. Knopf , 1992
(click for more details about Rising Sun.)
View all from this seller>