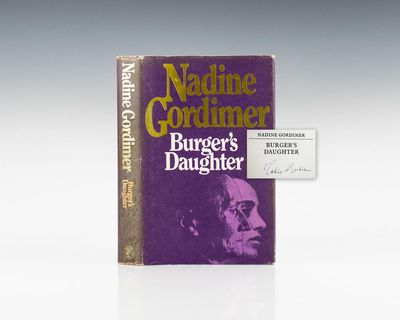 by Gordimer, Nadine
London: Jonathan Cape, 1979. First edition. Octavo, original cloth. Name inside the front panel, near fine in a very good dust jacket with some rubbing to the extremities. Signed by the author on the title page. Burger's Daughter details a group of white anti-apartheid activists in South Africa seeking to overthrow the South African government. It is set in the mid-1970s, and follows the life of Rosa, the title character, as she comes to terms with her father Lionel Burger's legacy as an activist in the South African Communist Party. While banned in South Africa, a copy of the book was smuggled into Mandela's prison cell on Robben Island, and he reported that he "thought well of it". (Inventory #: 3983)
$175.00 add to cart or Buy Direct from
Raptis Rare Books
Share this item