A Sense of Where You Are: A Profile of Princeton’s Bill Bradley. 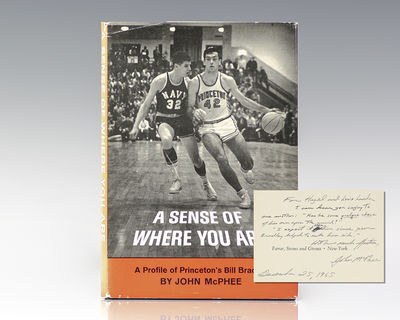 by McPhee, John
New York: Farrar, Straus and Giroux, 1965. First published in 1965, A Sense of Where You Are is the literary equivalent of a harmonic convergence, a remarkable confluence of two talents--John McPhee and Bill Bradley--at the beginning of what would prove to be long and distinguished careers. "Immensely well-written, inspiring without being preachy, and contains as well the clearest analyses of Bradley’s moves, fakes, and shots that have appeared in print" (The New York Times Book Review). (Inventory #: 3974)
$1,750.00 add to cart or Buy Direct from
Raptis Rare Books
Share this item

New York : Random House , 1957
(click for more details about Atlas Shrugged.)
View all from this seller>