Championship Chess and Checkers for All. 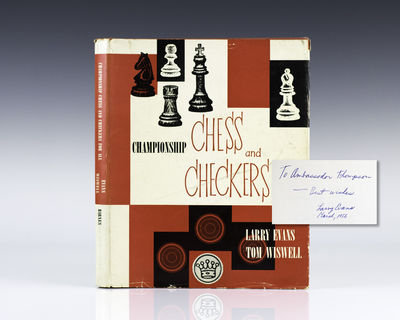 by Evans, Larry & Tom Wiswell
New York: A.S. Barnes and Company, 1953. First edition of this work by the chess grandmaster. Octavo, original cloth. Presentation copy, inscribed by Larry Evans on the front free endpaper, "To Ambassador Thompson Best wishes Larry Evans March, 1956." Fine in a very good dust jacket with a few closed tears. Llewellyn Thompson was the United States Ambassador to Austria from 1955–1957 and to Soviet Union from 1957 to 1962 and again between 1967 and 1969. He held a number of other positions throughout his U.S. foreign service career, including being the pivotal participant in the formulation of Johnson administration nuclear weapon non-proliferation policy. (Inventory #: 3981)
$350.00 add to cart or Buy Direct from
Raptis Rare Books
Share this item