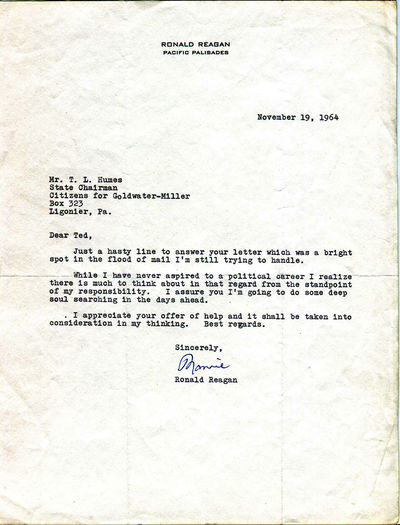 by REAGAN, RONALD
Pacific Palisades: np, 1964. 1st Edition. No Binding. IMPORTANT SIGNED LETTER BY RONALD REAGAN. On the heels of the great success of his famous speech for Barry Goldwater, Reagan weighs a political career for himself. Reagan "stepped up his activism in 1964, serving as cochairman of Barry Goldwater's presidential campaign in California and delivering a speech at the Republican National Convention in San Francisco. After the convention, as the Republican Party's chances of unseating incumbent Lyndon Johnson dwindled, Reagan stood by his candidate even as other Republicans kept their distance form Goldwater's conservative message, confrontational style, and disastrous poll numbers. When some of Goldwater's supporters asked Reagan to tape a television appearance on the candidate's behalf, he readily agreed. The campaign bought thirty minutes of airtime on NBC on October 27. "Reagan's reincarnation as a political figure began that night. In the decades to come, Reagan's admirers would refer to the television address of October 27, 1964 as THE Speech, the speech that launched one of the nation's most memorable political careers, the speech that put Reagan on an improbably journey to Sacramento and then the White House. Reagan himself acknowledged that his life was transformed on the October night in 1964. The speech, he wrote in his autobiography, 'was one of the most important milestones in my life'... "The speech was an instant hit; it was replayed throughout the country and helped raise eight million dollars for Goldwater's doomed campaign. Ronald Reagan's political career had begun" (Terry Golway, Ronald Reagan's America). After the speech and Goldwater's subsequent defeat, Reagan was under pressure to run for political office. In this important letter, written three weeks after the speech, Reagan acknowledges the pressure and shares his thought about the future and "his responsibility." Dated November 19, 1964 and addressed to Theodore L. Humes, the Pennsylvania State Chairman for Citizens for Goldwater-Miller, the letter reads in full: Dear Ted, Just a hasty line to answer your letter which was a bright spot in the flood of mail I'm still trying to handle. While I have never aspired to a political career I realize there is much to think about in that regard from the standpoint of my responsibility. I assure you I'm going to do some deep soul searching in the days ahead. I appreciate your offer of help and it shall be taken into consideration in my thinking. Best regards. Sincerely, [signed] Ronnie Ronald Reagan One 8.5 x 11 inch sheet of Reagan's Pacific Palisades letterhead. A few folds, small piece of mounting tape on verso, otherwise fine. (Inventory #: 1354)
$9,500.00 add to cart or Buy Direct from
Manhattan Rare Book Company
Share this item