[Set of Pictorial Lobby Cards for:] THE STORY OF ADELE H. 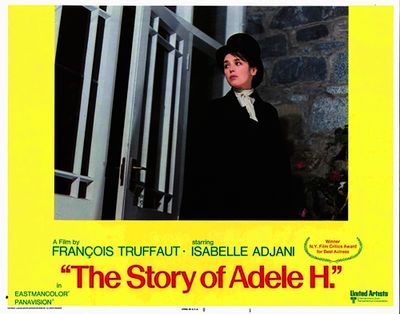 by Truffaut, François [director & screenwriter]
[Los Angeles]: United Artists, 1975. Eight color studio publicity lobby cards, 11 x14". Fine. A complete set of the lobby cards issued to promote the US release of the English language version of L'HISTOIRE D'ADÈLE H, the award-winning historical drama directed by François Truffaut, starring Isabelle Adjani, Bruce Robinson, and Sylvia Marriott. Written by Truffaut, Jean Gruault, and Suzanne Schiffman, the film explores the psyche of Adèle Hugo, the daughter of writer Victor Hugo, and was based on Adèle's diaries, focusing on her obsessive, unrequited love for a military officer, an obsession that leads to her downfall. (Inventory #: WRCLIT71164)
$85.00 add to cart or Buy Direct from
William Reese Co. - Literature
Share this item