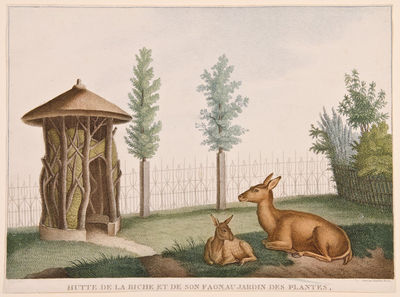 by HUET, After Nicolas (1770-1830)
Paris: Basset, 1808. Engravings, printed in colours and finished by hand, by Lambert freres after Huet. Image size: 10 5/8 x 14 1/2 inches approx. Four plates from a very rare early series of images of an early 19th-century zoological garden.

By the middle of the 19th century the "Jardin des Plantes" also included a "Menagerie," an aviary and various enclosures in the part of the garden known as the "Vallee Suisse." This series recalls the world of the menagerie as it was known to Lear (sketching his parrots at London Zoo) or Lord Derby (welcoming Lear to Knowsley, on a commission to capture the beauty of his private menagerie). The zoo then was a living cabinet of curiosities with little effort made to do anything more than educate on the most superficial level. They nevertheless metamorphosed into institutions with an important role to play in animal conservation, so the early "menageries," as depicted in the present work, in a real sense mark the beginning of a more understanding, and humane, attitude towards animals which is the general hallmark of our zoos today. The plates are titled: 1. L'Autriche près sa cabane au Jardin des Plantes [No. 3] 2. Chameau et Dromadaire près leur hutte au Jardin des Plantes [No. 6] 3. Hutte de la Biche et son faon, au Jardin des Plantes [No. 7] 4. Bouc et Chêvre près leur cabanne au Jardin des Plantes [No. ?]. (Inventory #: 19130)
$4,000.00 add to cart or Buy Direct from
Donald A. Heald Rare Books
Share this item
Donald A. Heald Rare Books
Offered by