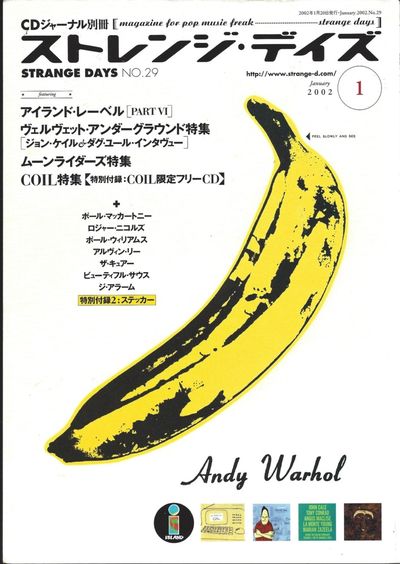 by Strange Days
Tokyo: Strange Days, 2002. First edition. Paperback. Near Fine. Tokyo: Strange Days, 2002. First edition. Near Fine. [Andy Warhol] Strange Days: Magazine for Pop Music Freak, No. 29. Tokyo: Strange Days, January 2002. Wraps, 5 7/8 by 8 1/4-inches, 217 pp. Near fine with minor corner rubbing. Text is in Japanese. This issue of the Japanese music periodical features artists influenced by Warhol, including interviews with Doug Yule and John Cage, four articles about the Velvet Underground, and a discography (in Japanese and English) for the Underground, as well as solo albums by Lou Reed, John Cale, Maureen Tucker, and Nico. A sticker of Warhol’s banana, “peel slowly and see,” is included, as is a mini-CD with the single “All Erase OK?” by Coil (not the British experimental band, but the Japanese pop group). $18.00 (Inventory #: 1092)
$18.00 add to cart Available from Bay Leaf Books
Share this item