Autograph Letter Signed to George Sylvester Viereck [and] Compliments slip with an inscription. 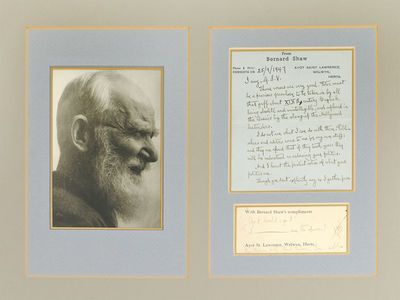 by Shaw, George Bernard.
Small 8vo. Ayot St. Lawrence: Sept. 25, 1947. Small 8vo., 5 1/2 x 4 3/4 inches, written ink on letterhead, framed with a portrait of Shaw, and a compliments slip inscribed by Shaw; very good. § A very good letter from Shaw to Viereck (1884-1962), a well-known and highly regarded German-American author who was jailed during WWII on specious grounds and not released until 1947. He wrote about the experience in a book “Men into Beasts” now seen as an early example of what evolved into gay pulp fiction. He also published a vampire novel in 1907 which is seen as a very early example of the genre, and early poetry described as Uranian male love poetry. He was a strong supporter of Hitler’s politics, though not at least overtly anti-Semitic. His son Peter Viereck was a well-known teacher and poet whose conservative positions were controversial. Shaw met George Viereck in the 1920s when Viereck interviewed him during a tour of Europe that included interviews with Hitler, Mussolini, and Einstein. Shaw writes: “Publishers and editors come to me for my own stuff and they are afraid that if they touch yours they will be understood as endorsing your politics. And I haven’t the faintest notion of what your politics are... I gather from your address that they let you out after five years. You seem to have stood it with extraordinary spirit. Most martyrs are duds... So your lady threw you over! Take care: she may come back. I am very very old. Ninety one.” Boldly signed ‘GBS’. Also present is a printed compliments slip inscribed by Shaw: “Go it Harold, go it! Damn the expense. The Malvern Hotel 25/8/30 GBS.” (Inventory #: 106092)
$1,275.00 add to cart or Buy Direct from
John Windle, Bookseller
Share this item