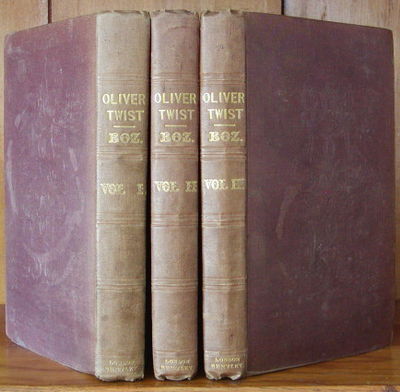 First Edition, first issue, of this classic novel that has also been a hit as a Broadway musical. This is the "true first edition," not merely the "first edition in book form." Unlike most of Dickens's novels, OLIVER TWIST was not first issued in monthly serial parts; it did appear in "Bentley's Miscellany" magazine from February 1837 through April 1839, but this three-volume edition was published in November 1838. (OLIVER TWIST was finally issued in ten serial parts in 1846 -- one of the scarcest "Dickens in parts.") Within a week after initial publication, copies began to be issued (at Dickens's insistence) with his name on the title pages (rather than "Boz"), and with the "church" plate replacing the "fireside" plate. This copy is of the first issue -- with "Boz" on the title pages and with the "fireside" plate at the end of Vol III. This set is in the primary fine-diaper cloth (some copies are in horizontally-ribbed cloth of the same color, but with a different arabesque design -- precedence unknown). This copy does have the "London/Bentley" imprint at the foot of the spines, where some copies are blank; it has been surmised that the blank binding is earlier, if only because Bentley would have been more likely to add than to remove his name from the volumes -- though precedence is far from certain. Lastly, the list of illustrations in Vol I is present in this copy: again it is uncertain whether its absence or its presence was the earlier state, though it is possible that Bentley may have begun inserting it when he realized that George Cruikshank's name had otherwise been omitted from the publication. (Bear in mind that the second issue, with Dickens's name on the title pages, was out within a week of the first; therefore, all of these questions of precedence among issue points involve only a few days.) This set is in FINE condition: there is essentially no external wear to the cloth, the spine gilt remains bright, the original yellow endpapers exhibit only the merest hint of cracking, there is scarcely any foxing at all on the textual leaves or plates... in fact, the ONLY notable flaw is that on two covers there is a faint partial glass-ring. Period. This is the best copy we have offered in our 40+ years in business. Smith I pp 28-37; Gimbel A27; Eckel pp 59-61; Carter BV p. 107 and MBV p. 7. Housed in a morocco-backed clamshell case. (Inventory #: 12634)
$12,500.00 add to cart or Buy Direct from
Sumner & Stillman
Share this item

1903
(click for more details about The Epic of the Wheat. THE PIT. A Story of Chicago)

1903
(click for more details about The Epic of the Wheat. THE PIT. A Story of Chicago)
View all from this seller>