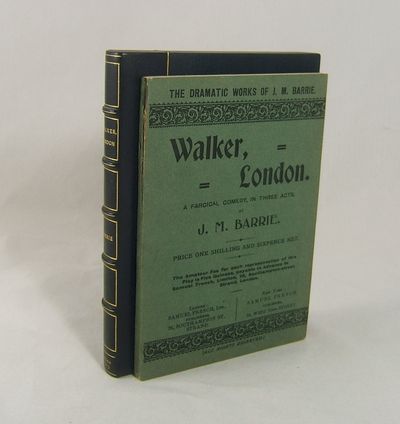 by Barrie, J(ames) M(atthew) J. M.
London: Samuel French, 1907. Barrie, J(ames) M(attthew). WALKER, LONDON. A Farcical Comedy in Three Acts. Frontispiece. In original publisher's wrappers, an exceedingly fine copy of this rare and fragile publication, very square and firm and without blemish save for a crease in the spine's paper covering most likely caused by the printing process which has resulted in a thin two-inch exposed seam. WALKER, LONDON was Barrie's first play, originally staged in 1892 but here published for the very first time. Barrie also met his wife Mary Ansell thanks to WALKER, LONDON as she was the actress who starred in the original production; her name is on the cast list found in this volume. Barrie's better known later plays included such masterpieces as QUALITY STREET, THE ADMIRABLE CRICHTON, and of course PETER PAN. Very tight copy, most likely unread; one is unlikely to find a better example. Housed in a beautiful quarter-morocco slipcase. . First Edition. Fine. (Inventory #: 001537)
$200.00 add to cart Available from
Lakin & Marley Rare Books
Share this item
Lakin & Marley Rare Books
Offered by

TERROR BY NIGHT (Unique Manuscript Screenplay Archive for the 1945-6 original Universal film SHERLOCK HOLMES adaptation based on Arthur Conan Doyle's "The Adventure of the Empty House.")