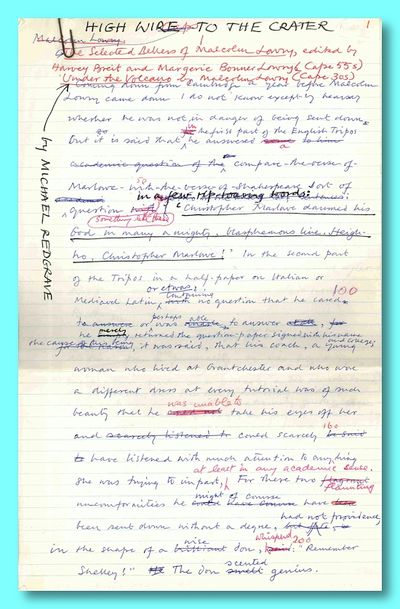 by [Lowry, Malcolm (subject)]: Redgrave, Sir Michael
[Np], 1967. Seven leaves of ruled 8 x 13" paper. Horizontal fold, paperclip rust mark at top edge, otherwise very good. An extensively revised working manuscript, in blue, red and black ink, of this review of Lowry's SELECTED LETTERS and UNDER THE VOLCANO, both published by Cape, the former the first UK edition, the latter the first UK edition to include Spender's Introduction. Redgrave had been at Cambridge at the same time as Lowry, and co-edited CAMBRIDGE POETRY 1930, which included Lowry's first appearance in book form. The actor incorporates in his review a substantial personal component, as well as the critical stance of a reviewer: "I remember him chiefly for his presence, as distinct from his personality. He was bright- eyed, sharp-nosed, burly and probably a bit muscle-bound ... but, with all his strength, extremely gentle ...." The review saw publication in the SUNDAY TIMES. (Inventory #: WRCLIT70500)
$600.00 add to cart or Buy Direct from
William Reese Co. - Literature
Share this item