Lea DeLaria and the Valencia Rose present: Two Professional Acrobats and One Guy Just Fooling Around [handbill] A benefit for Coming Up! 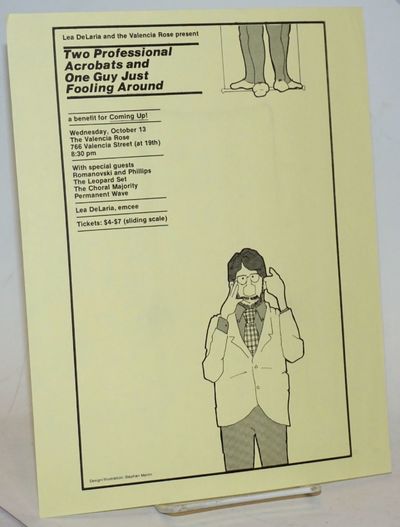 by DeLaria, Lea, illustration by Stephan Martin
San Francisco: Valencia Rose, 1982. 8.5x11 inch handbill printed one side, very light handling wear, very good on light yellow stock. This was the year that DeLaria came to San Francisco and began her long career doing stand-up comedy at the Valencia Rose in the Mission District. Eleven years later, Entertainment Weekly called her "the first openly gay comic to break the late-night talk-show barrier" after she appeared on The Arsenio Hall Show in 1993 and declared "I'm a bi i i i ig dyke!" Today she may be best known for her portrayal of "Big Boo" on Orange Is the New Black. (Inventory #: 188186)
$22.00 add to cart or Buy Direct from Bolerium Books
Share this item