A Globular Chart shewing the errors of Plain, and the Deficiencyes of Mercators Sailing, and Discovering the true Navigation according to the Globe 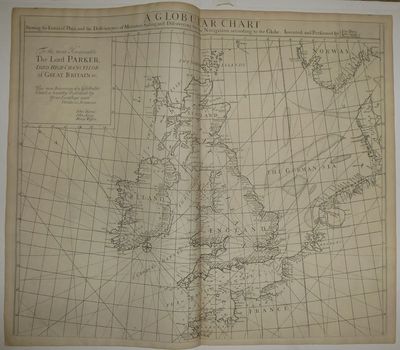 by CUTLER, Nathaniel; HALLEY, Sir Edmond; HARRIS, John; SENEX, John; and DEFOE, Daniel
London: James Knapton, 1728. Sea Chart. Uncolored engraving. An alternate projection of the globe as a flat map to the prevailing Mercator Projection. Includes rhumb lines and coastal details. From Atlas Maritimus, a commercial sea atlas was published as a guide to British global commerce. Good condition with some stains along lower center fold. Sir Edmond Halley (1656--1742) was an English astronomer, geophysicist, mathematician, meteorologist, and physicist known for computing the orbit of the eponymous Halley's Comet. He was the second Astronomer Royal in Britain after John Flamsteed. John Senex (1678 to1740) was an English cartographer, engraver and explorer who worked prominently in the 18th century. He is especially known for his maps of the world, some of which have added elevations and minuscule detailed engravings. Globular Projection maps were invented by Halley, Harris and Senex. (Inventory #: 250790)
$550.00 add to cart or Buy Direct from
Argosy Book Store
Share this item