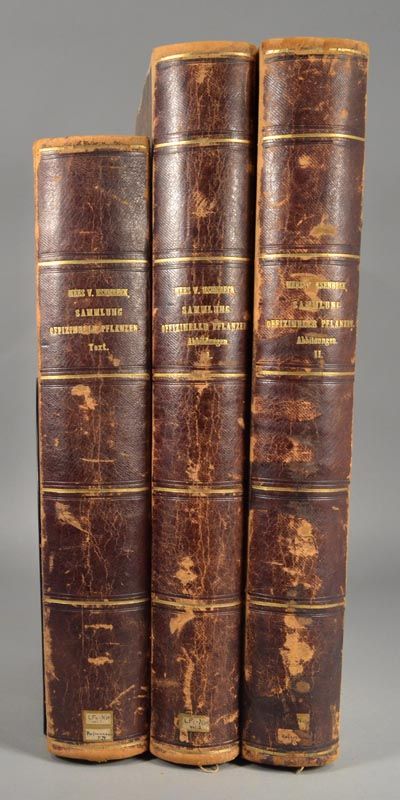 by NEES VON ESENBECK, Theodor Friedrich Ludwig
1828. ENRY, Aime. NEES VON ESENBECK, Theodor Friedrich Ludwig. PLANTAE OFFICINALIS oder Sammlung Officineller Pflanzen mit Lithographirten Abbildungen von A. Henry, und Beschreibungen von M.F. Weyhe, J.W. Wolter, und P.W. Funke. Fortgesetzt von Dr. Th. Fr. L. Nees v. Esenbeck. Dusseldorf, Arnz & Comp., [1821-]1828-1833. A great encyclopedia of medicinal plants, including the rare Supplement volume, is offered complete in three folio volumes: one volume of text, measuring 16 x 9.5 in., accompanied by two plate volumes with a combined total of 558 lithographed plates, measuring 18.25 x 11 in., of which 550 are hand-colored and 8 are plain. The plates by Aime Henry are both attractive and painstakingly clear and accurate. Nees von Esenbeck (1787-1837), the main author, was Inspector of the Leiden Botanic Garden and Director of the Bonn University Botanic Garden. The majority of this work was first issued from 1821-28 in 18 parts with 438 plates. A Supplement was published from 1829-33 in 5 parts with additional text and 120 plates. The descriptive texts and the plates from both the main work of 1828 and its 1833 Supplement have been alphabetized and bound together in the present three-volume format of one text and two plate volumes, retaining the title-pages from each. Text volume: [511] ff.; plate volumes: [ii, 274] ff. and [i, 284] ff. The text leaves are unsigned and unfoliated. The plates are unfoliated too, despite being identified by number in the indices bound at the end of the text volume, and have subsequently been consecutively numbered lightly in pencil across the two volumes, from 1 through 558. The text volume has two letterpress title-pages, the first dated 1828, and the second dated 1833 with the words "ICONES PLANTARUM MEDICINALIUM ... Erster Supplement-band mit 120 Abbildungen." The plate volumes have three lithographed title-pages between them. The first plate volume also has two title-pages dated 1828 and 1833. Although the 1833 title-page retains PLANTAE OFFICINALIS as the main title, it ends with "Erster Supplement-band mit 120 Abbildungen." Bound in contemporary quarter-leather and marble paper-covered boards, with the title SAMMLUNG OFFIZINELLER PFLANZEN gilt-stamped to spines, the bindings are worn at extremities and scuffed, and both bookblocks are separated in two within the bindi. (Inventory #: 86966)
$17,500.00 add to cart Available from
Boston Book Company
Share this item