Annals of James Macrae, governor of Madras, 1725-1731. Compiled from official records. By J. Talboys Wheeler, Professor of Moral Philosophy and Logic at the Madras Presidency College 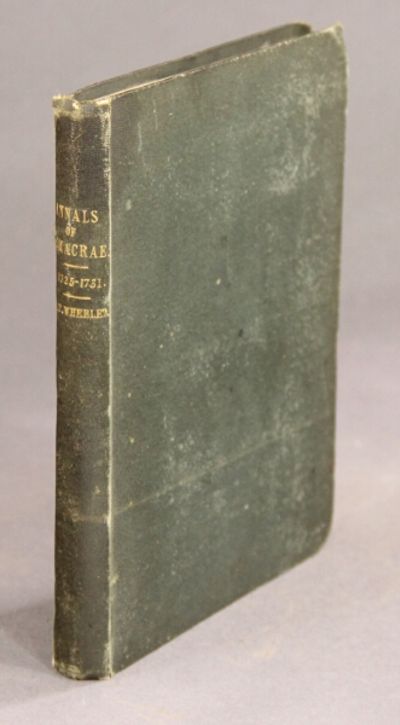 Madras: printed for private circulation only, by Graves and Co, 1862. First edition, 8vo, pp. vii, [1], 163; a bit of occasional spotting, else very good in original green cloth, gilt-lettered spine. With the ownership signature on the front free endpaper of "Dr. Gairdner ... Edinburgh." From the Preface: The accompanying annals of James Macrae ... forms a portion of the annals of Madras, which have recently been published by the author in three volumes small quarto under the title of Madras in the Olden Time. A few copies of the present Memoir have been struck off for private circulation only. James Macrae (1677 - 1744) was a Scottish seaman and administrator who served as the President of Fort St George (Madras) from 1725 to 1730. He is known for naval exploits against the pirate Edward England and for reforming the administration of Madras Presidency. 8 in OCLC only Harvard and one other in the U.S. (Inventory #: 45497)
$316.25 add to cart or Buy Direct from
rulon-miller books
Share this item