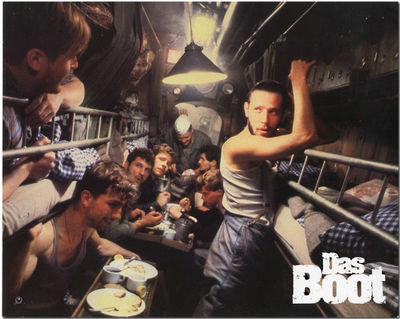 by [Buchheim, Lothar G. (sourcework)]: Peterson, Wolfgang [director and screenwriter]
[Berlin]: Neue Constantin Film, 1981. Twenty-four 9½ x 11¾" color borderless matte publicity photographs (or mini lobby cards), accompanied by one 7 x 9" black & white matte portrait. Enclosed in moderately used and tape mended printed envelope. Some photos have pinpricks at corners, else about fine. A striking set of fotosatz promoting the what many consider the best (ie. most realistic) cinematic treatment of submarine warfare during WWII, based on Lothar G. Buchheim's novel and adapted and directed by Wolfgang Peterson. The cast included Jürgen Prochnow, Herbert Grönemeyer, Klaus Wennemann, and many others, enough to fill an entire submarine, and the film was nominated for six Academy Awards. This set bears the stamps and sequence numbers of the original German distributor's Dutch affiliate on the verso of each still and on the envelope. (Inventory #: WRCLIT70750)
$125.00 add to cart or Buy Direct from
William Reese Co. - Literature
Share this item

SOME WOODCUTS BY HANS BURGKMAIR PRINTED AS AN APPENDIX TO THE FOURTH PART OF LE RELATIONI UNIVERSALI DI GIOVANNI BOTERO, 1618

Oxford : Printed for Presentation to the Members of the Roxburghe Club , 1960
(click for more details about SOME WOODCUTS BY HANS BURGKMAIR PRINTED AS AN APPENDIX TO THE FOURTH PART OF LE RELATIONI UNIVERSALI DI GIOVANNI BOTERO, 1618)
View all from this seller>