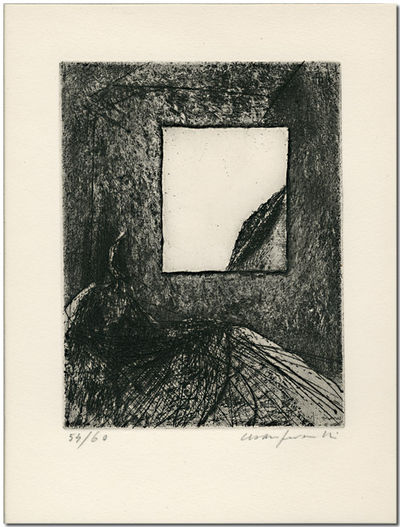 by Peverelli, Cesare
[Milan: Galerie Schwarz, 1961. Original monochrome etching, plate size 14.5 x 11 cm, on 26.5 x 19.5 cm sheet. Mounted in stiff board and acetate mat, with a 4 cm. lifting at the lower spine of the upper mat, and with printed caption on verso. Fine. One of sixty numbered copies, in addition to twenty-five copies numbered in Roman, signed and dated in the margin by the artist. Printed in Paris in the Atelier of Georges Leblanc on hand made paper from Papeteries de Rives. Peverelli (b. 1922 in Milan) studied at the Accademia di Belle Arti di Brera in Milan from 1940 to 1944. He associated with members of the Gruppo Corrente, and was one of the signers of the "Beyond Guernica" manifesto. He is a noted surrealist who later began to investigate the notion of spatialism, which is associated with the perception of space between various shades of grey. Peverelli began exhibiting in 1941, and has had a number of solo exhibitions of his works, including at the Musée d'Art Moderne, Paris, 1976; the Museo della Permanente, Milan, 1996; and the civic gallery in Modena, 2002. This print was published as an element of Galerie Schwarz's series, L'AVANGUARDIA INTERNAZIONALE. (Inventory #: WRCLIT70959)
$225.00 add to cart or Buy Direct from
William Reese Co. - Literature
Share this item