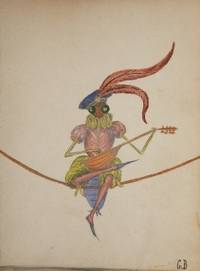 by Berra, Guillaume
France. Cloth. Custom clamshell box.. Very Good. No longer must one imagine Paganini, Stockowski, Bernstein or Rachmaninoff insects! Fantastical and fun depiction of a full orchestral band of anthropomorphic insects rendered in an electric riot of colors. N.d., circa late nineteenth century. 12mo. 16 by 12 cm. 65 leaves of original watercolor, pencil and ink illustrations of insects playing all kinds of musical instruments. The anthropormorphism follows in the tradition of Grandville, Varin and other eccentric French illustrators of the nineteenth century, yet whatever debt the artist here might owe to others does not detract from the brash originality of his own conception. And equally important, whether he was a professional artist or intending this work for publication or not, the quality of his execution sets this work apart from a mere amateur effort. One example of the artist's meticulousness is subtle: the careful placement of shadows. The work opens with a depiction of a butterfly conductor standing on a stack of books, followed by string players, woodwind instrumentalists, the percussion section, and finally a pianist and an organist. Interspersed are a few insects with other props such as a jester's puppet or a processional torchere. The whimsical touches include such things as two flies collaboration on the playing of the bass, a bassoon with vegetables as its accessories, dress that ranges from high collars, flamboyant bows and vests and tailcoats, to a vast array of footwear. The artist managed to somehow fuse the insect's natural features with garments seamlessly. This is a work in which the whole is greater than the sum of the parts, and there is not a touch or effect that comes off as not on the mark. Light to moderate wear to the cloth cover. The album is cocked somewhat, perhaps the result of the curvature to the heavy card stock used for the leaves. (Inventory #: 003390)
$12,500.00 add to cart Available from
White Fox Rare Books & Antiques
Share this item
White Fox Rare Books and Antiques
Offered by