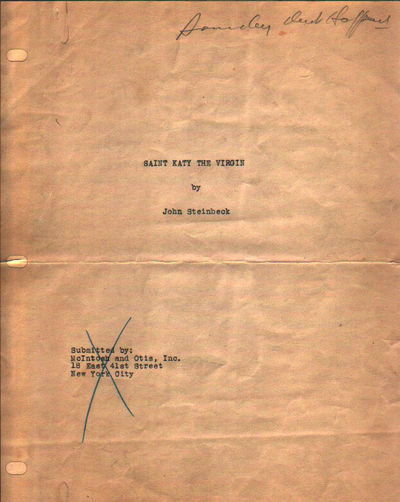 This is the typescript as submitted by Steinbeck's agents very likely to produce the signed/limited edition of this short story about a pig and its alleged virginity, it consists of the title page and 13 typed leaves of the story with corrections in Steinbeck's hand, followed by one blank leaf, the typed notation about it being submitted by McIntosh & Otis with that agency's New York address has been X-ed out in ink, the eventually-produced book was one of 199 copies signed by Steinbeck and used as a Christmas greeting for friends of Steinbeck and Covici Friede which was then his publisher, the story was later reprised in Steinbeck's short story collection, The Long Valley, his first book published by Viking, rare, unique, now housed in a custom chemise and box with red leather spine with five raised bands and gilt notations. Pencil name on title page, expected age and wear. (Inventory #: JD30869)
$12,500.00 add to cart Available from
James M. Dourgarian, Bookman
Share this item