The Acts of King Arthur and His Noble Knights 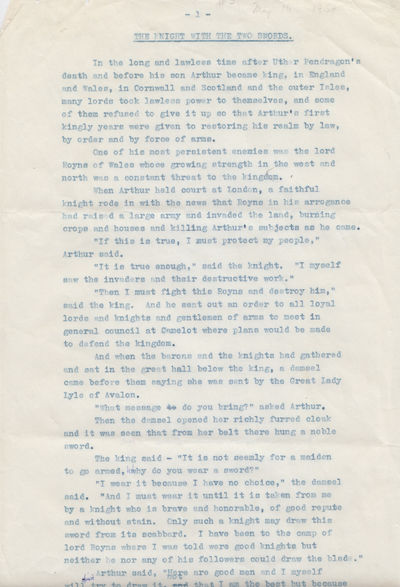 This is a group of three carbon typescripts, all with holographic corrections by Steinbeck, and one carbon manuscript that comprise three chapters of what Farrar, Straus & Giroux published as The Acts of King Arthur and His Nobel Knights in 1976, eight years after the death of Steinbeck and 17 years after the 1959 date these chapters were written, the chapters are The Knight With The Two Swords,Gawain, Ewain, and Marhalt, and The Noble Tale of Sir Lancelot of the Lake, this typescript and manuscript material totals 348 leafs, on typing paper and sheets of lined legal-sized yellow notepaper, housed within a green marbled custom folding box with leather spine with author's name and title in gilt are the carbon manuscript of The Noble Tale of Sir Lancelot of the Lake, 81 leafs numbered 19-100, followed by 168 leafs of carbon typescript for this chapter, with notes in Steinbeck's hand, together with a blue marbled custom folding box with leather spine with author and title in gilt that houses the carbon typescript for The Knight With The Two Swords, dated May 16, 1959, being 22 leafs, with many penciled corrections, deletions, and revisions by Steinbeck, followed by Gawain, Ewain and Marhalt, noted in pencil as Section 5 and dated July 1959, being 72 leafs, also with many ink corrections, deletions, and revisions in Steinbeck's hand, Steinbeck's fascination with King Arthur began when his Aunt Mollie gave him a copy of The Boy's King Arthur when he was eight years old, that book began a life-long affair with the written word and to his continued study of King Arthur, he eventually tried to "translate" Arthur into modern English which Farrar, Straus & Giroux eventually published after his death, in his own introduction for that book Steinbeck wrote, "I remember that words -- written or printed -- were devils, and books, because they gave me pain, were my enemies....And then, one day, an aunt gave me a book and fatuously ignored my resentment. I stared at the black print with hatred, and then, gradually, the pages opened and let me in. The magic happened....I think my sense of right and wrong, my feelings of noblesse oblige, and any thought I may have against the oppressor and for the oppressed came from this secret book". Expected wear. (Inventory #: JD30866)
$25,000.00 add to cart Available from
James M. Dourgarian, Bookman
Share this item