The Winter of Our Discontent 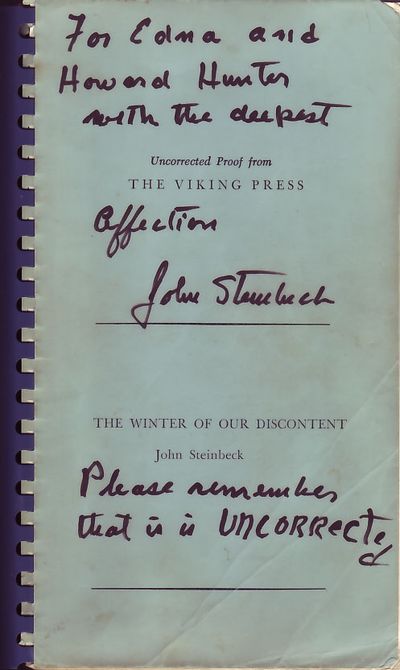 Advance copy, a spiral-bound uncorrected galley proof, printed on rectos only, a very scarce state of the book made all the more rare in that it is an Author Presentation Copy, being Inscribed by Steinbeck to the best man at his second wedding, Howard O. Hunter, who was the Works Progress Administration (WPA) commissioner in the early 1940s in the FDR administration, Steinbeck inscribed the front cover as follows: "For Edna and/Howard Hunter/with the deepest/affection/John Steinbeck," he amended his inscription a little lower on the front cover by noting "Please remember/that it is uncorrected," the proof has one preliminary after which the novel begins, thus it lacks the published version's half titles, title and copyright pages, a list of other books by the author, the dedication page and a page stating that people and places within the book are fictional, although the Nobel Prize for Literature is awarded for the body of an author's work and not a specific book, it is generally believed that Steinbeck won the 1962 Nobel Prize for Literature because of this morality story, laid in loosely is a brief typed signed letter from a relative of Edna Hunter, Ellen Leonard, which provides some provenance, it states "The Winter of Our Discontent an uncorrected galley was given to me by my great aunt Edna Hunter. She was married to Howard O. Hunter who was deputy administrator to the WPA during the FDR administration in the early 1940's," this advanced state is not recorded by Goldstone & Payne or Morrow, now housed in a beautiful clamshell case with leather spine. Very good. (Inventory #: JD29488)
$12,500.00 add to cart Available from
James M. Dourgarian, Bookman
Share this item