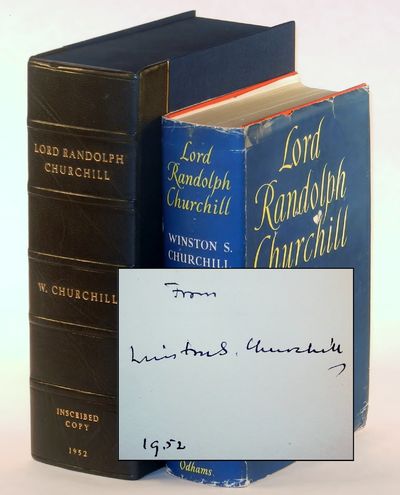 by Winston S. Churchill
London: Odhams Press Limited, 1952. Hardcover. This is a signed and dated copy of the 1952 edition of Lord Randolph Churchill, Winston Churchill's biography of his father. The inscription in three lines in black ink on the first free endpaper reads: "From | Winston S. Churchill | 1952". Churchill's first biographic work concentrates on Lord Randolph's career in Parliament after 1880. Lord Randolph died in January 1895 at age 45 following the spectacular collapse of both his health and political career. His son Winston was 20 years old. When he first contemplated writing his father's biography Winston Churchill was a still an itinerant soldier and war correspondent who had yet to write his first book. The son still dwelt very much in his father's shadow, both emotionally and in terms of the political career to which he already aspired. By the time the work was published in 1906, the young Winston Churchill already had half a dozen books to his credit and half a decade in Parliament. By 1906 Churchill had already left his father's political party, prevailed in the same political battle that had terminated his father's career, and was just two years from his first Cabinet post. Churchill was criticized by some reviewers for overplaying his father's accomplishments. Nonetheless, the work was well received both as a frank portrayal of Randolph's extremes and as a showcase for the son's literary talent. The British first edition was published in two volumes in 1906. This 1952 single-volume edition contains the full text of the original 1906 two-volume edition plus an interesting new Introduction by the author written specifically for this edition, making it bibliographically important and collectable. Echoing some of the themes of his yet-unpublished essay "The Dream" Churchill summarizes some of the immense changes to Britain and its position in the world and speculates on how his father would have regarded them. This edition was striking but fragile. The red-orange cloth bindings are thin, prone to sunning, soiling, and gutterbreaks. The dust jackets are thin and easily scuffed and torn. This inscribed copy is near fine in a good plus dust jacket. The binding is notably clean for the edition, retaining a nicely rounded spine, vivid orange-red color, and bright spine gilt. The contents remain immaculately bright with no spotting and no previous ownership marks other than the author's inscription. The sole flaw noted is a slightly tender front hinge, with a cosmetic split to the gutter paper at the front pastedown, but the mull beneath still fully intact. The dust jacket is bright and complete, but with overall wear to extremities, hinges, and minor scuffing to the front face. The dust jacket is protected in a removable, archival quality clear cover. The book is housed in a quarter morocco custom clamshell preservation case with a rounded and hubbed spine over blue cloth with gilt spine print and transition rule on the covers, and lined interior. Condition of the case is excellent, with a small dent at the spine head the only defect noted. Laid in we found the description of a previous bookseller stating that this book is "From the library of Kathleen Hill, sometime private secretary to Churchill." Rose Ethel Kathleen Hill became Churchill's first Residential Secretary in 1937, living at Chartwell from July 1938 to September 1939, after which she served as Churchill's Personal Private Secretary from 1939 to 1946. We have no further evidence to substantiate the provenance claim. Bibliographic reference: Cohen A17.5, Woods/ICS A8(c), Langworth p.75. (Inventory #: 002853)
$4,725.00 add to cart or Buy Direct from
Share this item