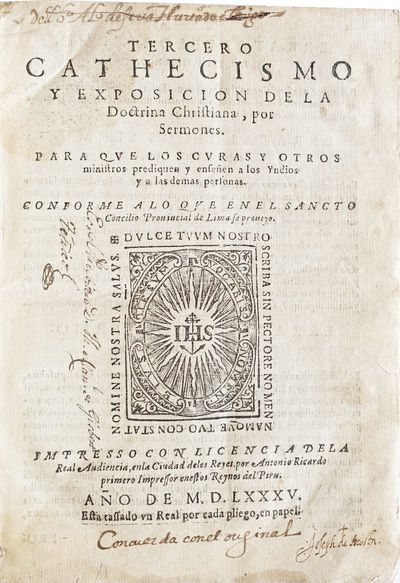 first edition
by [CATHOLIC CHURCH, Catechism].
Los Reyes [i.e., Lima], Por Antonio Ricardo, 1585.. First Edition. 4¡, contemporary limp vellum (slightly darkened), yapped edges, remains of ties. Large Jesuit device on title-page, woodcut initials. Text in Spanish (italic type), Quechua, and Aymara (both roman type). Dampstained and browned. Small tears on leaves 127, 128 and 196 repaired, without loss of text. In good to very good condition. Early signatures on title-page include that of Father Joseph de Acosta, S.J., author of the famous Historia natural y moral de las Indias and editor of this book. Early annotations (some in Quechua) and later ownership signature on endpapers, including a relatively modern one ("Propriedad de Raul Valdes Pinilla"). (8), 215 ll. *** FIRST EDITION. A work of notable rarity, and of great importance for the religious, ethnological, and linguistic history of early colonial Peru. According to the verso of the second preliminary leaf, it was prepared by Juan de Atiena and Jos de Acosta. Acosta's signature appears on the title-page of this copy.This is the third or fourth book printed at the first press in South America. Ricardo, who had previously printed in Mexico City, was granted a license by the Audencia on 13 February 1584 to print books in Lima under the supervision of the Jesuits. Works from Ricardo's press are very rare on today's market.The catechism is printed with the Spanish text at the head of each page. Below are double columns of Quechua and Aymara. Quechua (the language of the Incas) and Aymara are the two major languages of the Andes.Jos de Acosta (1539 or 1540, Medina del Campo-1600, Salamanca) became a Jesuit novice at age thirteen. In 1570, he and several other Jesuits landed at Cartagena de Indias and traveled to Panama. There he set sail for Lima, and was soon sent across the Andes to the interior of Peru, where he spent years traveling the interior. Later he spent several years in Mexico. By 1587 he returned to Spain, where he published De natura novi orbis in Salamanca, 1588. His Historia natural y moral de las Indias, Seville, 1590, was among the first detailed, realistic descriptions of the New World.*** Medina, Lima 3. Palau 330311. Sabin 94838. BL, Pre-1601 Spanish STC (1966) p. 112. JCB I, i, 330. Johnson, The Book in the Americas 34. Viaza, Bibliografa espaola de lenguas indgenas de America p. 81: had not seen a copy. Maggs, The First Three Books Printed in South America. Backer-Sommervogel I, 3233. Ternaux 161. HSA p. 108. See Leclerc 2116. Not in Adams. Not in Garcia Icazbalceta, Apuntes para un catlogo de escritores en lenguas indgenas de Amrica. KVK (51 databases searched): Ibero-Americanisches Institut PK Bibliothek (microfiche); Universittsbibliothek Kiel; Biblioteca Casanatense-Roma; Bibliothque nationale de France; Bonn Altamerikanistik (microfiche); British Library; Biblioteca Nacional de Espaa. NUC: NN, DLC, RPJCB. (Inventory #: 24058)
$360,000.00 add to cart
Share this item