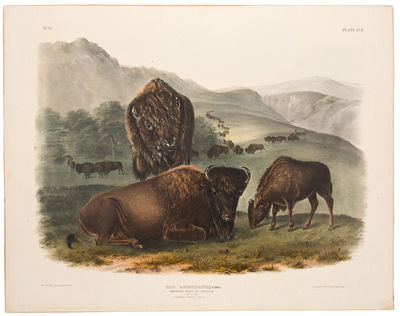 by AUDUBON, John James (1785-1851)
New York: J.J. Audubon, 1849. Lithograph after J.J. Audubon, coloured by hand by J. T. Bowen of Philadelphia. An iconic image from the folio first edition of Audubon's quadrupeds of North America, the greatest illustrated natural history work to be produced in America during the nineteenth century: "As long as our civilization lasts, America will be in debt to this genius" (Roger Tory Peterson). This very fine plate is from the folio edition of John James Audubon's The Viviparous Quadrupeds of North America, produced entirely in the United States. The work was to be John James Audubon's last, and by 1846 he had to hand over the drawing of the final 50 or so plates to his sons, John Wodehouse and Victor Audubon. The final parts of this work of national importance were published after his death in 1851, but the images remain as a final fitting memorial to the greatest American wildlife artist who ever lived. The production of the Quadrupeds was begun by John James Audubon and his sons at about the same as the commercially-successful octavo edition of The Birds of America. Unlike the double-elephant folio, the Quadrupeds was produced entirely in the United States. William Reese notes that "By 1843 the Audubon family business was a well-oiled machine, involving John James, his two sons,... and various in-laws and friends. The octavo Birds was still in production when J.T. Bowen began to produce the plates for the elephant folio edition of the Quadrupeds, the largest successful color plate book project of 19th-century America. It took the family five years to publish 150 plates in thirty parts. The massive project was a commercial success, thanks to the close management of Victor. There were about three hundred subscribers" (Stamped with a National Character pp.58-59). Cf. Bennett, p. 5; cf. Reese Stamped With A National Character 36; cf. Sabin 2367; cf. Wood, p. 209. (Inventory #: 27830)
$14,000.00 add to cart or Buy Direct from
Donald A. Heald Rare Books
Share this item
Donald A. Heald Rare Books
Offered by

A Monograph of the British Nudibranchiate Mollusca

London : Ray Society , 1910
(click for more details about A Monograph of the British Nudibranchiate Mollusca)

A Narrative of Voyages and Travels, in the Northern and Southern Hemispheres: comprising three voyages round the world..

Boston : by E.G. House for the author , 1817
(click for more details about A Narrative of Voyages and Travels, in the Northern and Southern Hemispheres: comprising three voyages round the world..)
View all from this seller>