THREE BOYS ON AN ELECTRICAL BOAT .. 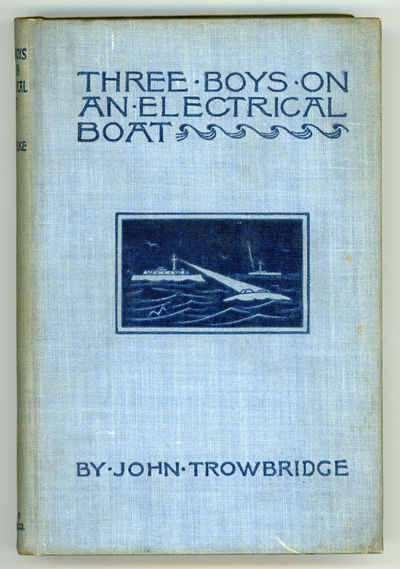 by Trowbridge, John Townsend
Boston and New York: Houghton, 1894. Octavo, pp. [1-4] [1] 2-215 [216-220: blank] [note: last two leaves are blanks], flyleaf at front, original pictorial blue-gray cloth, front and spine panels stamped in dark blue, gray coated endpapers. First edition. Aboard the Electron, a powerful advanced warship built for the U.S. Navy, the brilliant inventor Greatthings prepares to test his latest invention, an electric torpedo which will be guided to it's target by young boys. Trowbridge (1843-1923), a professor of physics at Harvard for forty years, wrote several adventure novels for young readers utilizing various electrical inventions, including THE ELECTRICAL BOY (1891), THREE BOYS ON AN ELECTRICAL BOAT (1894) and THE RESOLUTE MR. PANSY: AN ELECTRICAL STORY FOR BOYS (1897). Bleiler (1978), p. 195. Not in Reginald (1979; 1992). Christmas gift inscription dated 1894 on recto of front flyleaf. Hint of sunning to cloth on spine panel, else a bright, near fine copy. (#147312) (Inventory #: 147312)
$125.00 add to cart or Buy Direct from L.W. Currey
Share this item
L.W. Currey Inc.
Offered by