THE TEMPLE OF FIRE .. 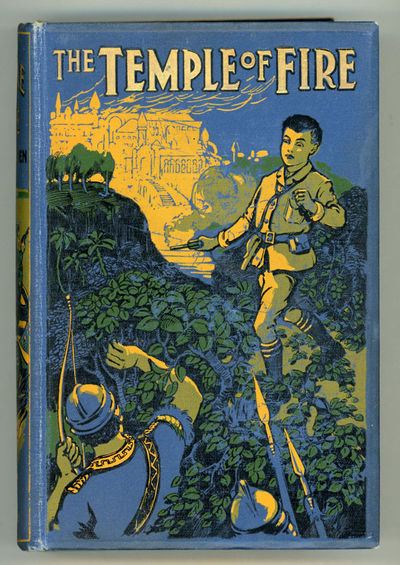 by Ramsden, Lewis (pseudonym of A. L. Dowding)
London and Glasgow: Collins Clear-Type Press, 1905. Octavo, pp. [1-2] 3-360 + 16-page undated publisher's catalogue inserted at rear, six inserted plates with illustrations, one in color, by John Schonberg, title page printed in orange and black, original pictorial bevel-edged blue cloth, front and spine panels stamped in black, green, brown, orange and gold, maroon coated endpapers. First edition. Boys' lost race adventure novel of the discovery of the flourishing "Land of Iran," located on a nearly inaccessible rocky island in the Atlantic, which is inhabited by people of ancient Persian origin, an aboriginal Indian race, and "The People who went Down into Darkness," degraded descendants of an ancient "fair race, great and potent, who ages ago, inhabited the island, and whom the Indians regarded as something more than mortal." The loathsome remnant of these troglodytes dwell in huge caverns under the island where they prey upon unwary travelers who stray into or near their cavernous abodes. "One of the few lost race novels focusing on the Persians. A bit better than the usual boys book." - Leon Gammell. Locke, A Spectrum of Fantasy, p. 180. Reginald 11985. Not in Bleiler (1948; 1978). Slight spine lean, several very faint spots to rear cover, a bright, nearly fine copy. An uncommon book. (#147139) (Inventory #: 147139)
$350.00 add to cart or Buy Direct from L.W. Currey
Share this item
L.W. Currey Inc.
Offered by