THE AZTEC TREASURE-HOUSE: A ROMANCE OF CONTEMPORANEOUS ANTIQUITY .. 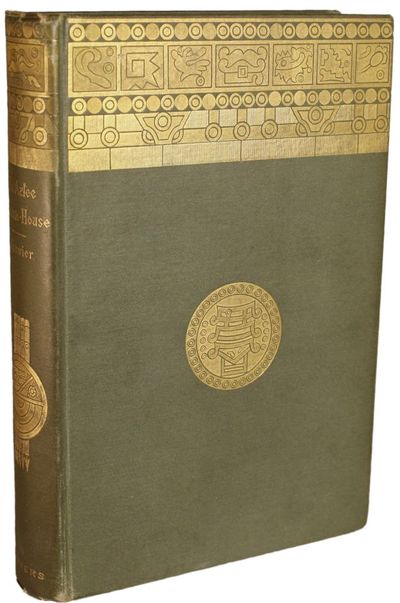 by Janvier, Thomas A[llibone]
New York: Harper & Brothers, 1890. Octavo, pp. [i-vii] viii [xi-xii] [13] 14-446 [447-448: ads] [note: first leaf is a blank], fly leaves at front and rear, nineteen inserted plates with illustrations by Frederick Remington, original decorated gray-green cloth, front and spine panels stamped in gold. First edition. Adventure novel in which an American archeologist finds a surviving remnant of the Aztec empire in Central America. "An attempt to write a serious adult adventure story on the concept of surviving Aztec antiquities." - Bleiler, Science-Fiction: The Early Years 1181. Alluding to William Dean Howells, famous as the chief proponent of the new school of realism in American literature, one contemporary reviewer wrote, "Mr. Janvier has produced a rattling, galloping romance of the sort that must fill Mr. Howells's soul with bitterness ... Mr. Janvier may now be hailed as the American Haggard ... Moreover he is a literary workman of another and higher order than the biographer of Quatermain ..." - Lippincott's Monthly Magazine, December, 1890, p. 865. Anatomy of Wonder (1976) 2-100 and (1981) 1-107. Clareson, Science Fiction in America, 1870s-1930s 447. Locke, A Spectrum of Fantasy, p. 122. In 333. Blanck, Peter Parley to Penrod, p. 145 (borderline selection). Wright (III) 1941. BAL 10841. Cloth a bit rubbed at spine ends and corner tips, a nearly fine, very bright copy. Tipped in is a two-page autograph letter signed (ALs) dated 5 June 1894 from Janvier to Richard Watson Gilder, editor of CENTURY MAGAZINE and one of the key literary figures of the period, in which Janvier declines what was apparently a writing assignment from Gilder to provide some sort of travel sketch on Provence, stating that he preferred to go there "at our own expense" and "will write what I want to write-and the issue shall remain with God!" In passing, he explains his reasons for demanding high pay and his dislike of literary syndication. An interesting letter. The book is housed in a custom quarter red morocco and red cloth slipcase with spine panel elaborately tooled and lettered in gold. A pleasing copy of a handsome book. (#149644) (Inventory #: 149644)
$750.00 add to cart or Buy Direct from L.W. Currey
Share this item
L.W. Currey Inc.
Offered by