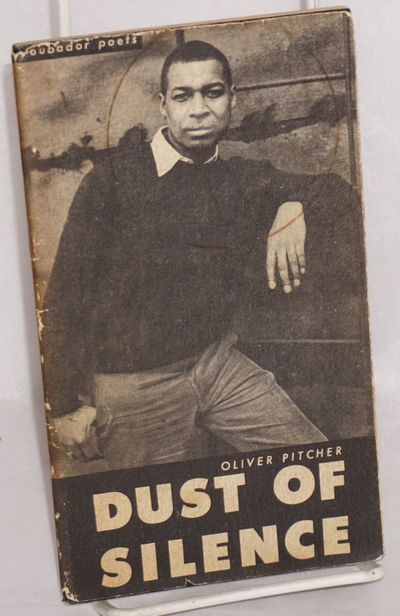 by Pitcher, Oliver, with an introduction by Robert Grantham
New York and San Francisco: Troubador Poets, 1958. Paperback. 31p., wear, rubbing and toning, slim paperback first edition in stiff black wraps and gilt titles, in lightly worn dj, jacket bearing a photographic portrait of Pitcher, repeated as frontispiece, front flap of jacket is split (about 75% of its length), back flap begun to split, coffee-splashes and dust-soil mark the rear panel, and on the cover photoportrait a cup ring encircles Pitcher's head. First book by the African American poet/playwright who had his first play, "One" produced by the Negro Ensemble Co. and published in Black Drama Anthology. (Inventory #: 102336)
$25.00 add to cart or Buy Direct from Bolerium Books
Share this item