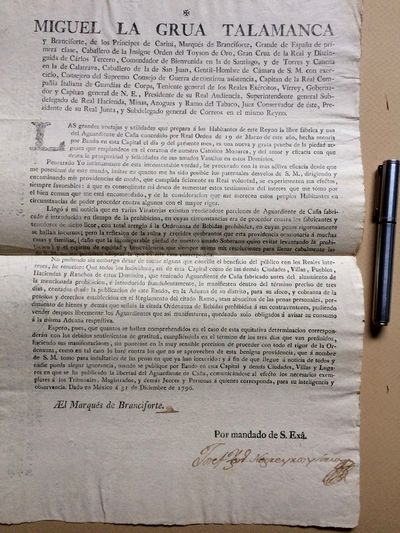 by La Grua Talamanca, Miguel, Marques de Branciforte
Mexico City, December 31, 1796. Double folio sheet, 24 x 16 in, printed on one side only. Branciforte was viceroy from 1794 - 1798. He is considered one of the most corrupt that ever ruled New Spain. This proclamation, very nicely printed, affirms the king's desire to restore the making and selling of rum in the colony, which had been proscribed for several years -- this, the venal marquis notes, is out of the king's piety and the goodness of heart! (It is to be noted that aguardiente de cana covers not only the production of rum, but also pulque: it is very likely that the prohibition of the "fabrica y uso" was so unpopular as to be unenforceable. Further, the marquis as viceroy, though he is aware that there has been much illegal use of the drink, will give anyone guilty of making or selling rum three days from the publication of this proclamation, to report to customs and thus be exempt from the penalties accrued during the time of prohibition. With the rubric of the Viceroy and the full signature of his secretary, Josef Ign. Negreyros y Soria. Quite scarce: no record at auction or OCLC, although there is a copy noted of the royal proclamation itself, issued also by Branciforte. Fine copy. (Inventory #: 6802)
$750.00 add to cart Available from Plaza Books
Share this item