Memoirs of the Life of Agrippina, the wife of Germanicus…In three volumes 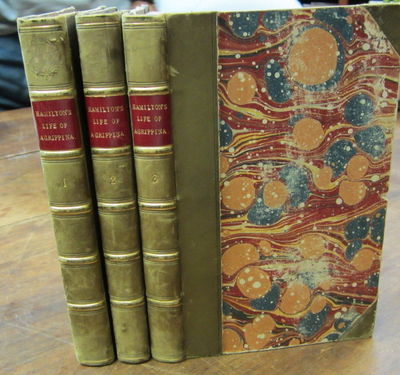 by Hamilton, Elizabeth
Bath: Printed by R. Cruttwell; for G. and J. Robinson, Pater-noster-row, London, 1804 First edition. Later nineteenth-century calf over marbled boards, gilt spine with burgundy morocco labels, edges sprinkled red. Marbled endpapers, armorial bookplate of Donegal landowner Horatio Granville Murray Stewart (1834-1904) in each volume. Three volumes, octavo. Remains of small circular label on spine of Volume I, some light dampstaining at fore-margin, and a few marginal pencil marks in the same volume. Otherwise a very good, attractive set, complete with half-titles. Elizabeth Hamilton (1758-1808) is best known for her influential works on education, such as Letters on the Elementary Principles of Education. She was "one of the earliest British pioneers of the theories of Pestalozzi" (Stewart & McCann, p. 14), and was much admired by Maria Edgeworth. She also wrote social criticism, somewhat in the style of Goldsmith's Citizen of the World, and books on Scottish manners and customs, which earned the praise of Sir Walter Scott. The present work is considered admirable in its understanding of Roman laws and customs. It has been called "an important attempt to deal seriously with the life of an admirable Roman woman" (Blain, Clements and Grundy, Feminist Companion to literature in English). (Inventory #: 7324)
$750.00 add to cart or Buy Direct from
Michael R. Thompson Rare Books
Share this item
Michael R. Thompson Rare Books
Offered by