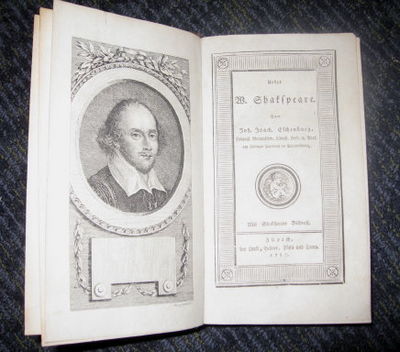 by Eschenburg, Johann Joachim
Zurich: bey Drell, Gessner, Füssli und Comp., 1787 First edition. Contemporary half calf, spine gilt. . Octavo. Minor rubbing. A fine copy. Very scarce. The first full-fledged German study of Shakespeare. Eschenburg was a prominent critic and literary historian who is particularly remembered for his efforts to familiarize his countrymen with English literature. He published translations of John Brown, Daniel Webb, Charles Burney, Joseph Priestley, and Richard Hurd, but his most notable achievement was the first full translation, in prose, of Shakespeare's plays, published in thirteen volumes from 1775 to 1782. The present very substantial work has long chapters on Shakespeare's life, his contemporaries, the theaters and actors of the period, etc., as well as analysis of individual plays, and the sonnets and other poems. (Inventory #: 7610)
$2000.00 add to cart or Buy Direct from
Michael R. Thompson Rare Books
Share this item
Michael R. Thompson Rare Books
Offered by