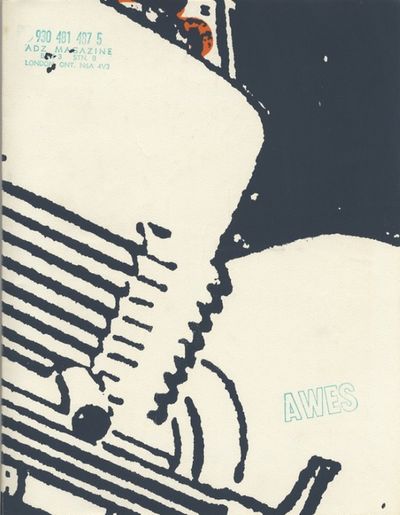 by Awes Studio ( Phillip Ross, Michael Bidner, et al)
London, Ont: Canyon Production (Canada), The Awes Studio, 1977. First edition. Ross, Phillip. 4to., unnumbered leaves, color and b&w illustrations, largely from photographs, many printed using Xerography; several printed and/or illustrated items are laid in, including a large folded poster, an application for an American Express card stamped "Adz Magazine." The booklet is bound in illustrated paper. All laid in a silver foil stiff folder with illustration mounted on front. The wraparound band has a closed tear, tape residue stains, the owner's neat signature stamp and a silver gelatin photographic publisher's label affixed to the front panel. Minor creases to the outer wrappers. Very good. Issued as Number 24 in the series Adz Magazine, founded in 1976 by Michael Bidner (1944-1989), a multimedia artist and philatelist, and Artistamp pioneer. (Bidner collected by way of correspondence art or mail art - Artist Stamps from artists worldwide. His database of Artist Stamps came to be known as Artistamps.) Each issue is a conceptual performance - an Artist's Book. This issue was a collaborative work by and edited by members of the Awes Studio: Phil Ross, Michael O'Henly, Michael Bidner, Ford Evans, Randy Dunlop and Thomas Lodge. Laid in is a folded printed paper which states, "Adz Magazines are books made by artists - ask for them at art galleries and in fine hotels everywhere - write Box 3 Station B London Canada Limited Edition Releases - award winning - spectacular & candid." OCLC lists only eight issues of Adz Magazine, with only six of the issues held in any libraries. OCLC lists just five libraries having this issue. Limited to 500 copies, this is number #120. (Inventory #: 23887)
$250.00 add to cart or Buy Direct from
Andrew Cahan: Bookseller
Share this item
Andrew Cahan: Bookseller, Ltd.
Offered by