Acts of the General Assembly of the Province of New-Jersey ... 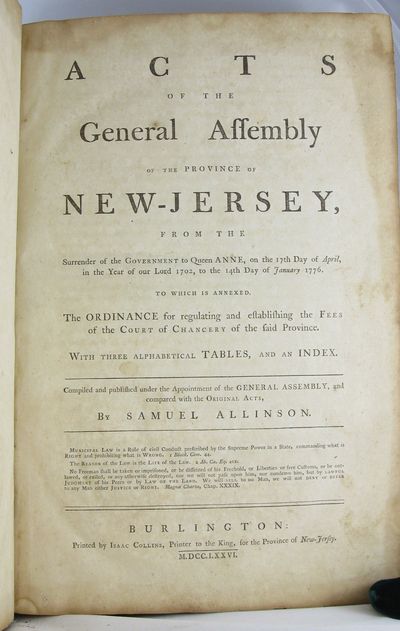 by NEW JERSEY. LAWS
1776. NEW JERSEY. LAWS. Acts of the General Assembly of the Province of New-Jersey, from the Surrender of the Government to Queen Anne, on the 17th Day of April, in the Year of Our Lord 1702, to the 14th Day of January 1776 ... By Samuel Allinson.... Burlington: Isaac Collins, 1776. Folio. viii, 493, [1], 6, 6, 4, 4, 3, [1], 15 p. Contemporary sheepskin, blind two-line fillet around covers, blind decorative roll along spine side, blind roll on board edges, spine with raised cords and red morocco label, by James Leishman. The usual light foxing present in all copies, occasional minor spotting, else a lovely collector's copy in a tight original binding. A compilation of all the laws in force in New Jersey in 1776. Though begun several years earlier, publication was delayed by Governor William Franklin's constant quarrels with the assembly, the outbreak of hostilities, and, finally, as Allinson notes in his preface, the inability to obtain sufficient paper, "... the Want of [which] stop'd the Press several Weeks at sundry Times, until more could be manufactured." The quality of the paper varies considerably, and all copies exhibit differing degrees of foxing and browning from gathering to gathering. There are several contemporary manuscript corrections, also present in all copies and probably done in the printer's shop. The edition was bound by James Leishman, of Burlington, but copies in the original binding are usually dry and broken. This one is remarkably tight and desirable. For a detailed account of the evolution and printing history of Allinson's Laws, see Felcone, New Jersey Books, 158, and Felcone, Printing in New Jersey, 1754-1800, 214. Evans 14911; ESTC W6511. (Inventory #: 14668)
$1,000.00 add to cart or Buy Direct from
Joseph J. Felcone
Share this item
Joseph J. Felcone Inc.
Offered by