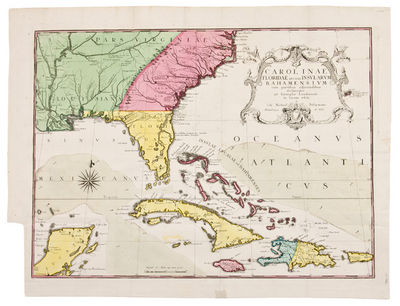 by [CATESBY, Mark (1683-1749)] - Johan Michael SELIGMANN (1720-1762)
Nuremberg: Seligmann, 1755. Copper-engraved map, with full original hand colouring, in good condition apart from an expertly repaired split to the fold. A fine copy of the first and only Continental edition of a Map of Carolina, Florida, and the Bahama Islands, here with particularly fine period hand-colouring. The English edition of this map (first published in Vol.II of Mark Catesby's Natural History of South Carolina, and the Bahama Islands, London, 1743) is now virtually unobtainable. This has greatly increased the desirability of this fine Continental version, which is itself quite scarce. Seligmann's Sammlung verschiedener auslaendischer und seltener Vögel was published in nine parts between 1749 and 1776, and included a German translation of Catesby's work with re-engraved versions of his images, including the present map. Catesby's work was the first natural history of American flora and fauna. Catesby scholar G.F. Frick calls this map "a good representation of the better English ideas about the geography of North America" in the period. It is not generally recognized that the English version of this map appeared in two states. On the first state of 1743, the territory on both sides of the Mississippi was coloured green, to indicate that the entire region was in the hands of the French. A second state was included in the third edition of the Natural History in 1771, altered to show the political realignment brought about by the Treaty of Paris in 1763. The territory on the east bank of the Mississippi, which had been acquired by Britain, was now coloured green; the territory to the West, which now belonged to Spain, was coloured blue. The present German edition corresponds with the English first state. The map shows Southeastern North America as far west as the Mississippi River, plus the nearby Caribbean islands of the Bahamas, Cuba, Jamaica, and Hispaniola. Cf. Cumming, The Southeast in Early Maps (1998 ed.), 210 & 292. (Inventory #: 18372)
$6500.00 add to cart or Buy Direct from
Donald A. Heald Rare Books
Share this item
Donald A. Heald Rare Books
Offered by