The son of the wolf: tales of the far north 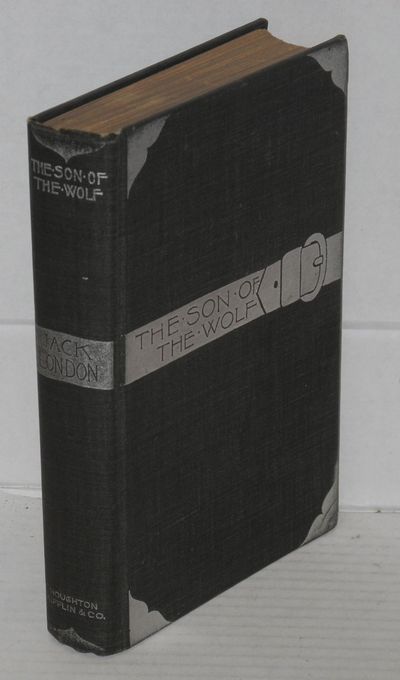 by London, Jack, Maynard Dixon illustration
Boston: Houghton Mifflin, 1900. Hardcover. frontis by Maynard Dixon inserted, [i-viii] [1] 251p., printer's imprint [252] blank leaf, very good blackish green cloth with silver buckled belt and corners, silver on spine somewhat worn, first edition, printing of 2028 copies according to Sisson/Martens pages 2 &116 and BAL 11869 and Woodbridge. Publisher's imprint at bottom of spine first state with no periods around ampersand : Houghton | Mifflin & Co.; no broken type on page 147 (perfect "e" in spruce and perfect "t" in might) no broken type on 64-67, commas before and after 1900 on copyright page, sets of binding threads between 6/7, 18/19 and every six leaves thereafter. Two neat previous owners' book plates on front endpapers. This copy matches all first printing, first state points with the following two discrepancies from Sisson: 1. the frontispiece has the caption "Malemute Kid Halted Him" (page 64) as opposed to "The Men of the Forty Mile" as stated in Sisson; 2. The frontispiece appears to be inserted rather than sewn-in although Swann's auctioned described first printing with frontis tipped-in stating later printings were sewn-in, a disagreement with Sisson. Also, to this bibliographer the color of the binding is in question as well. Appears to be a blackish-green but could be interpreted as a deep gray-green. All-in-all a very nice copy of the author's rare first book. (Inventory #: 190813)
$1,750.00 add to cart or Buy Direct from Bolerium Books
Share this item