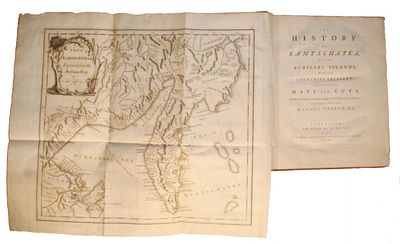 by Krasheninnikov, Stepan Petrovich; Grieve, James (Translator)
Glocester: R. Raikes for T. Jefferys, 1764. First Edition. Hardcover. Near fine. Quarto, pp. [8], 280, [8], with 7 engraved maps and plates (4 folding). Contemporary calf boards with new, complementary calf spine in six compartments. Some edgewear to boards; minor foxing to endpapers; text and plates exceptionally clean and bright. Bookplate of Sir Joseph Copley on front pastedown. An abridged translation of the Russian edition of 1755, which offered "The first reliable descriptions of Kamchatka, based on the observations of the author and his companions during the Russian expedition to the far north, 1734-43, a part of Bering's Great Northern Expedition" (Arctic Bib. 9264, 9265). It describes the customs, morals, religion, and languages of the inhabitants of the Kamchatkan peninsula. In addition, the the author had access to the notes made by pioneering German botanist George Steller during his travels to North America with Bering's expedition, and the second part of the narrative includes much on the natural history of the region. Steller's observations "are an important part of this work and constitute one of the earliest accounts of Alaska and the Aleutian islands" (Hill 948). (Inventory #: 15085)
$3,750.00 add to cart or Buy Direct from Walkabout Books
Share this item


(click for more details about Eureka Insect Exterminator....It is Guaranteed. Try it)
View all from this seller>