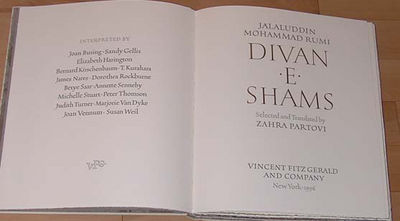 by FitzGerald & Co., Vincent. Rumi, Jalaluddin Mohammad
New York: Vincent FitzGerald & Company, 1996. Artist's book, signed, limited edition, one of 50 copies, all on hand-made papers by Dieu Donne and BFK Rives, signed by the translator / calligrapher, Zahra Partovi and each of the 15 artists. Page size: 12-1/2 inches x 14 inches; 112pp; 4 of which are double folds, title page of incredible beauty and delicacy printed in black, light gray, and title in gold gilt, verso of half-title page printed in palladium and black, many pages of verse printed in two colors, the second color varying each time. Index of first lines page plus colophon signed by Zahra Partovi in Persian. Bound by Craig Jensen at BookLab in ivory linen in Coptic style binding with brown and gray endpapers that are etchings of various leaves, and housed in silver silk over boards custom-made clamshell box, title in palladium on spine, engraved ornament on front panel of box, fine. Translated by Zahra Partovi and interpreted by Joan Busing, Sandy Gellis, Elizabeth Harington, Bernard Kirschenbaum, T. Kurahara, James Nares, Dorthea Rockburne, Betye Saar, Annette Senneby, Michelle Stuart, Peter Thomson, Judith Turner, Marjorie Van Dyke, Joan Vennum, and Susan Weil. Etchings editioned by Vincent FitzGerald and Marjorie Van Dyke at The Printmaking Workshop. Lothar Osterburg at Lothar Osterburg Photogravure, and Lynn Rogan at Lynn Rogan Associates. Lithograph by Judith Solodkin at Solo Impression. Silkscreen by Colorgirls. Sculpture editioning by John Depp, Inc. Letterpress by Daniel Keleher of Wild Carrot Letterpress on Rives BFK paper. Zahra Partovi's beautiful Persian calligraphy is reproduced by offset. The glass sculpture by Senneby, editioned by John Depp, Inc., is embedded in the case. This extremely beautiful book contains original graphic works and one sculpture (glass laid in to back of custom-made clamshell box) by 15 artists, some mounted, some on multiple or folded leaves, some on colored or translucent paper; most signed in pencil by the respective artist. Vincent FitzGerald and Zahra Partovi have now collaborated on nine books presenting the writings of the 13th century Persian poet, jurist, theologian and teacher of Sufism, Jalaluddin Mohammad Rumi. One of the central figures of Islamic culture, Rumi (1207-1273) only recently began to emerge as a poet of significance to Westerners. Zahra Partovi, the translator, who has taught the poetry of Rumi at The New School for Social Research, is widely acknowledged as one of the leading interpreters of his work for English-speaking readers. Working in the tradition of the great French publishers of the livre de peintre, such as Ambroise Vollard, Henri Kahnweiler, Teriade, and Iliazd, FitzGerald has brought the 20th century art form into the 21st century. With this assemblage of artists and crafts people, he has presented to the viewing / reading public some of the most important texts of our time in elegant and beautiful books. DIVAN-E-SHAMS is certainly at the top of this list. (Inventory #: 6642)
$15000.00 add to cart or Buy Direct from
Priscilla Juvelis
Share this item