Study of Two Pears / Etude de deux poires. A Poem by Wallace Stevens with a translation into French by Bernard Noel and mezzotints by Judith Rothchild 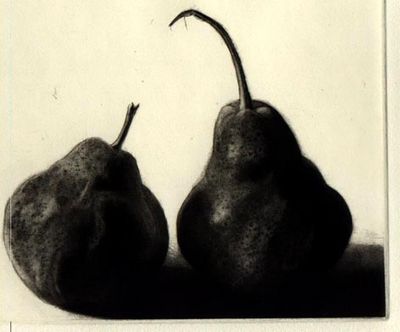 by Verdigris Press. Stevens, Wallace
Octon, France: Verdigris Press, 2003. One of 44 copies from a total issue of 50, all on Hahnemuhle paper, each copy signed in pencil by the artist, Judith Rothchild, and the printer, Mark Lintott, and hand-numbered in pencil; the 6 deluxe copies with an original copper plate and housed in custom-made clamshell box by Mark Lintott. 20pp; page size: 11 x 11-13/16". Bound: leporello loose in original wrappers that are green, brown, and gold screen-printed paper by Judith Rothchild, the title printed in dark green in French and English on the front and in dark brown on the brown spine, housed in publisher's slipcase of the same screen-printed paper by Rothchild. Judith Rothchild's mezzotints are extraordinarily beautiful with 9 separate plates (including title page) of single and double pears. There are pears blind engraved on the white spaces of the pages. The text is hand-set letterpress and was printed on an 1867 Albion press by Mark Lintott with Wallace Stevens' English verse in black and Bernard Noel's French translation following it in brown. Judith Rothchild's affinity for objects from the natural world - pomegranates, figs, grapevines - is confirmed in this splendid edition of Wallace Stevens' verse. It is about as lovely a book as I've seen - the velvety mezzotints infusing a mystery and wonder for the miracle of this fruit so taken for granted. Rothchild's sculptural pears are indeed what Stevens' meant when he wrote, "Opusculum paedagogum. / The pears are not viols, / Nudes or bottles. They resemble nothing else." (Inventory #: 9399)
$1200.00 add to cart or Buy Direct from
Priscilla Juvelis
Share this item