Carola Woerishoffer Her Life and Work 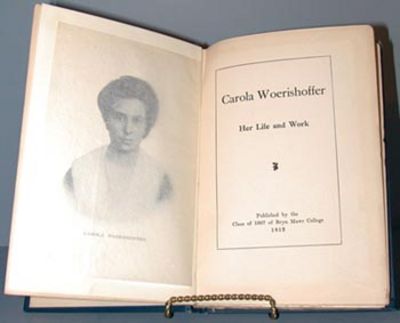 by [Tarbell, Ida] Bryn Mawr College Class of 1907
[Bryn Mawr, PA]: Bryn Mawr College, 1912. First Edition. 8vo; 137pp; original blue gilt-stamped cloth with title on front panel and spine, a bit rubbed on bottom of spine, some minor soiling to covers, ink ownership inscription and date on inside front pastedown, pages a bit age-toned, about very good. Carola Woerishoffer (1885-1911), social work and philanthropist was born to a wealthy New York family. From her father who died the year after her birth, she inherited well over a million dollars. She attended Bryn Mawr determined to pursue a career in social work. Immediately upon graduation she joined the board of manages of Greenwich House, a neighborhood settlement founded by Mary Simkhovitch. Preferring that her good works remain anonymous, she worked for four months, fifteen hours a day, as a laundress in a dozen different establishments observing the deplorable conditions reporting them to the Consumer's League of New York City. She joined the New York Women's Trade Union League and backed the 1909 strike by putting up her own property for a $75,000 bond, declaring she would remain in court until the strike was settled. In 1911, while serving as an investigator for the State Bureau of Immigration, she worked on the Triangle Fire Investigation and did much work collecting evidence for the surviving workers. She also managed to find time to serve as a district leader of the New York Woman Suffrage Party. She was killed in a car accident at the age of 26 - cutting short a promising career of public service. She left $750,000 to Bryn Mawr which was used to found the Carola Woerishoffer Graduate Department of Social Economy and Social Research, the first professional school of its kind to be connected with a college or university. Ida Tarbell contributed the 32-page Introduction to this memorial volume, which was later published in the "American Magazine," July 1912. In the Introduction Tarbell eulogizes her subject calling her actions part of the "Revolt of the Young Rich." The balance of the text is a series of vignettes from professors and staff who knew her. According to NAW, this text is the primary source of information for this extraordinary woman. NAW III, pp. 639-640. Nathan, THE STORY OF AN EPOCH-MAKING MOVEMENT, pp. 8-81. (Inventory #: 9337)
$175.00 add to cart or Buy Direct from
Priscilla Juvelis
Share this item