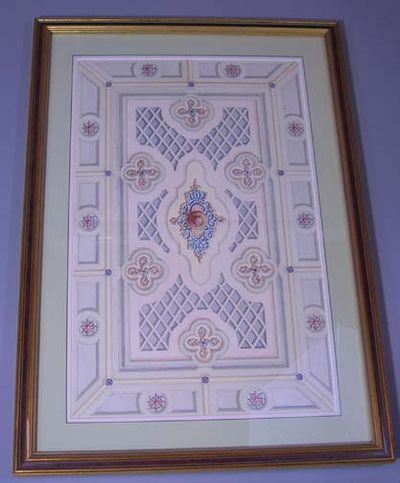 by Russell, Archimedes
[NP but probably Syracuse, NY, 1870. Watercolor on laid paper, 19 x 13", of ceiling design for large rectangular room; soft gray ground with soft pink overlay in lattice motif, elaborate center medallion of light blue, dark blue, gold and pink with shell motif on either side of central pendent, six quatre foil medallions, one at each end and two on each side, in gray, light blue, and dark rose; the side borders in gray with 10 rosettes in light and dark pink highlighted with 10 small roundels of deep rose highlighted with blue strapwork. folded in middle with small closed tear at one end of fold, paper a bit age-toned at extremities, else fine with colors bright and fresh. Although the work is unsigned, it was purchased from the estate of the widow of Archimedes Russell together with his leather wallet diary for 1863 and other personal letters now in the Kroch Library at Cornell University. It is on paper identical to other architectural drawings by Russell at the Kroch Library. Other architectural watercolors by Russell in the collections of Syracuse and Cornell are not signed, and it appears he did not sign many of his works. Archimedes Russell, 1840-1915, was born in Andover, MA and first trained with well-known Boston architect John Stevens. In 1862 Russell relocated to Syracuse and apprenticed with Horatio N. White. By 1868 Russell was working for himself and was in demand. He took Melvin L. King as a partner in 1888. The firm that Russell established in 1868 continues to this day, known as King & King. It is the oldest architectural firm in the state of New York. Russell designed some 850 structures in and around Syracuse for the next 45 years. He served as professor of architecture at Syracuse University and built many of that institutions important buildings. He built a number of structures at Cornell University, including McGraw Hall Tower and Hiram Sibley Hall which houses Cornell's School of Architecture. This is a lovely architectural drawing in a pleasing color palette from one the most important American architects of the 19th century. (Inventory #: 9122)
$6500.00 add to cart or Buy Direct from
Priscilla Juvelis
Share this item