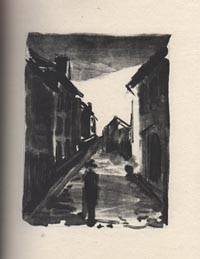 by [Vlaminck, Georges] Duhamel, Georges
Paris: Editions Marcel Seheur, 1927. One of 25 copies on Japon Shidzuoka with an extra suite on Chine, from a total issue of 345: 25 tirage de tete on Japon Shidzuoka as described above, 320 on Velin d'Arches ordinary issue (20 of which hors commerce). Page size: 12 7/8 x 9 1/4". Bound: full black crushed morocco by E. MAYLANDER spine with author, title, date and place in gilt, five raised bands extending to front and back panel simulating clasps, all edges gilt, caramel morocco doublures surrounded by gold fillet, brown and blue silk brocade flyleaves, paste-paper flyleaves, ex-libris on lower front paste-paper, signed on lower front turn-in, "Rel. E. Maylander. Dor.," original wrappers bound in, morocco-edged paste-paper slipcase, signed in gilt, "Maylander." spine a bit rubbed on raised bands. Illustrated with one original etching (frontispiece)and 24 original lithographs, plus two additional suites (the ordinary issue had one additional suite), this is the second Vlaminck title published by Seheur. Mourlot pulled the lithographs. Vlaminck (1876-1958), one of the more prolific members of the School of Paris, exhibited with the Fauves in 1905. His earlier work is generally more sought after than his later studied landscapes. This lovely book -- with its strong graphic images -- gives reason to that prejudice. References: Lilly Library, Beyond Illustration: The Livre d'Artiste in the Twentieth Century, No. 16. Rauch 94. (Inventory #: 990)
$4500.00 add to cart or Buy Direct from
Priscilla Juvelis
Share this item