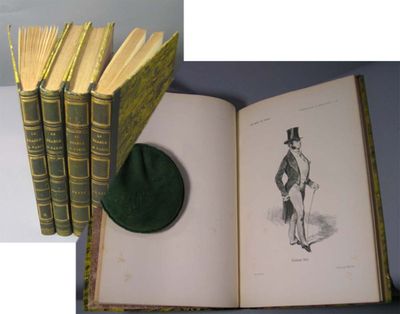 by Gavarni
Paris: J. Hetzel, 1846. First Edition. Page size: 10-1/2" x 7". (I) lxxx, 363pp; (II) xxxii, 380pp; in two text volumes; numerous vignettes + 212 illustrations in two plate volumes; contemporary quarter deep blue-green morocco over marbled boards, title and volume in gilt on the spine, marbled endpapers. Minor rubbing to the extremities, limited abrading to the marbling, causing loss in a few small areas, boards exposed at the corners, 1" band of discoloration to the front board beginning at ½" from the top edge and descending 8" but pronounced only near the top, impression from the half-binding of another volume on the front board of Volume III, hinges beginning to show on Volumes I and II, occasional foxing and minor discoloration. Gordon Ray in The Art of the French Illustrated Book describes this title as „something of a potpourri". The texts are by well-known writers including Balzac, Gauthier, Musset, George Sand, and the publisher, Hetzel. Although there are historical, geographical and statistical details about the city of Paris, the bulk of the text is made up of stories and dialogues with Parisian subjects. The illustrations are wood engravings. Ray states the "most impressive are the 208 ...after Gavarni." Sulpice-Guillaume Chevallier, known as Gavarni, also worked in lithography. In either medium his psychological portraits were telling. Ray especially praises his wood engravings for this title, however, noting that they were superior to much of his other work and all new conceptions (not versions of his lithos). Hetzel imposed unity on the texts and images by presenting them as documents bearing on the Devil's visitation of Paris. This is the culmination of the Romantic tradition of diablerie and the last of the big books of collaboration. Ray, The Art of the French Illustrated Book, #236. (Inventory #: 8462)
$700.00 add to cart or Buy Direct from
Priscilla Juvelis
Share this item