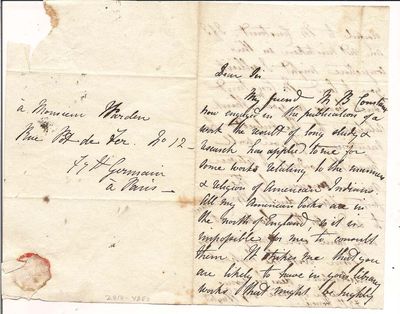 by Wright, Frances
Paris [France], 1820. Single sheet, written on two sides plus third used as address leaf, 8 x 6-3/8" folded in half, with seal, outer top rear corner missing where tom away by recipient (and stuck to seal) on opening. Some browning else very y good. Frances Wright (1795-1852), author, utopian reformer, advocate of women's rights, education and abolition, was born in Scotland to a wealthy family. Orphaned at age 2, she spent a peripatetic childhood. In 1818, accompanied only by her sister, she embarked on her first trip to America - a land that immediately captured her imagination and changed her life forever. She returned to England two years later and wrote VIEWS OF SOCIETY AND MANNERS IN AMERICA (1821). The favorable account of the New World was favorably received and translated into three languages. She started a correspondence with another advocate of the United States, the Marquis de Lafayette. By 1822, she had moved in with him at his family estate in Seine-et-Marne as his "adopted" daughter, much to the consternation of his family. She remained there two years and was introduced into Lafayette's literary and political "celebrity" world. When he embarked on his final triumphant tour of the U.S. in 1824, Wright followed him. There, with Lafayette's introductions, she met Jefferson, Madison, Monroe et al.She was once again completely taken with American. She did not return to France with Lafayette in 1825. She saw slavery as being the overwhelming problem in her newly adopted country and set about eradicating the national evil. Her proposal, specifically, was gradual emancipation and to this end she bought 320 acres in the Tennessee wilderness and set up a utopian community, calling it Nashoba. Besides the abolition of slavery, universal education (for slaves and women), the community advocated total racial integration and free love. The community failed, but not before Wright had met Scottish industrialist and utopian, Robert Owen, the founder of New Harmony. In 1828, she ran a newspaper with Robert Dale Owen, the New Harmony Gazette and in 1929, at her own expense, the New York newspaper, the Free Enquirer, which advocated abolition and women's rights. In 1828, she embarked on a public speaking tour. She was the first woman to address men and women from a public platform - and was soundly criticized, not to mention vilified in print with uncomplimentary cartoons in newspapers and by the clergy from pulpits. Her advocating of educational reform through "guardianship" (separating parents and children during formative years) was doomed to failure. Her advocacy of sexual emancipation for women marginalized her. Her causes were extremely unpopular in the 1820's. It would be at least 30 to 100 years before the problems of abolition, women's rights, educational reform, and birth control would be addressed. Wright was the direct predecessor of the Grimke sisters and Elizabeth Cady Stanton. She violated the proprieties of her day with her reforms and, in doing so, led the way for those who followed. Letters in the hand of Frances Wright are scarce. This letter almost certainly refers to the French writer and politician, Benjamin Constant ( Henri-Benjamin Constant de Rebecque) best known for his novel Adolphe , and a brilliant political career after 1818 as the leader of the Liberal opposition in the Chambre des Deputes. In some sort of odd parallel universe, it is interesting to note that Constant was attracted to older members of the opposite sex - as was his friend, Frances Wright. Constant spent 17 years at the beck and call of Germaine de Stael, one of the chief precursors of Romanticism and modern criticism. Her novel, Corinne, is often seen as an early feminist work. One cannot help but wonder how close his friendship with Wright was. The work of his referred to her may be his De la religion ((1824-1831). Frances Wright occupies a unique place in the history of women's rights. She was clearly an icon for the first wave of feminists, as evidenced by the prominence of her portrait in Volume I of the History of Woman Suffrage by Stanton, Anthony & Gage (1881), as the frontispiece opposite the title page. Further, her name is second on the dedication page, preceded only by Mary Wollstonecraft as an intellectual founder of the movement. While her utopian community failed, her demands for equal rights (personal and political) lived on in the next generation of women. Timelines, p. 290. NAW III, pp. 675-680. Woloch, Woman and the American Experience I, pp. 106, 154-169, 177-178, 187, 191, 194. (Inventory #: 7409)
$3700.00 add to cart or Buy Direct from
Priscilla Juvelis
Share this item