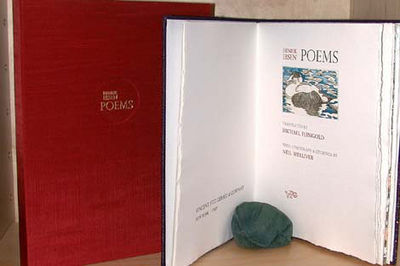 by FitzGerald & Co., Vincent. Ibsen, Henrik
New York: Vincent FitzGerald & Company, 1987. First Edition in English of Ibsen's poems, one of 75 copies only, with six etchings, including a double page fold-out. Page size: 8-1/2 x 11-1/2". These etchings were executed in the roullette mezzotint medium by Welliver with the assistance of the master printer, Shigemitsu Tsukaguchi (who prints only for Welliver and Lichtenstein) in this painstaking method resulting in the subtle coloring in each plate. Printed on handmade Dieu Donne' paper by Dan Keleher at the Wild Carrot Letterpress in Perpetua, this is a splendid literary event. Michael Feingold, lead drama critic of THE VILLAGE VOICE for the past decade, is internationally known for his translations of Kurt Weill, Brecht, and Ibsen's prose plays, THE PRETENDERS and WHEN WE DEAD AWAKEN. He is the recipient of a Guggenheim Fellowship, NEA Translation Fellowship, and the American Book Award's Lowenfels Prize for Criticism. The late Neil Welliver, celebrated for his ability to merge Abstract Expressionist and representational techniques, has his work in the Whitney, MOMA, San Francisco Museum of Modern Art, Hirschhorn, Boston, Houston, Baltimore and Philadelphia's museums. He was Professor of Fine Arts at the University of Pennsylvania and resided in Lincolnville, Maine, where the rocky and wooded landscape that figures so frequently in his works bears a strong kinship to the Northern vistas celebrated by Ibsen. Fine. (Inventory #: 5436)
$5800.00 add to cart or Buy Direct from
Priscilla Juvelis
Share this item