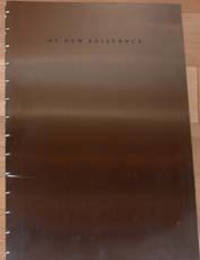 by FitzGerald & Co., Vincent. Kondoleon, Harry
New York: Vincent FitzGerald &Co, 2002. First Edition, one of 35 copies only, all on hand-made papers including Magnani, Japanese Gampi and special paper by Dieu Donne Papermill. Signed by the artist, Aleksandar Duravcevic with his initials on the colophon. Page size: 14-1/5 x 9-1/2 inches, 38pp. Bound by Zahra Partovi: hand sewn with exposed spine and stitching covers of brushed stianless steel, with title etched in black on front, housed in heavy felt case, fine. The type was set in Century Schoolbook and printed letterpress by Daniel Keleher's Wild Carrot Letterpress. The 9 etched pages, comprising various flowers, are by Aleksandar Duravcevic and were editioned by D2 Press. Harry Kondoleon, a graduate of Yale Drama School, won an Obie in 1983. His death from AIDS in 1994 left a void in an American theatre but he had, by his death at age 39, created 17 long and short plays as well as poetry. These posthumously published poems, written by the dying Kondoleon, are particularly moving meditations on life and death. The book is a loving and beautiful tribute to this gifted young author. (Inventory #: 9568)
$3000.00 add to cart or Buy Direct from
Priscilla Juvelis
Share this item