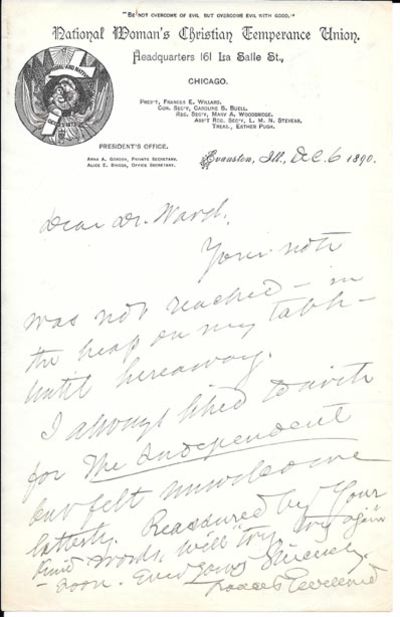 by Willard, Frances
Evanston, Ill, 1890. Autograph Letter Signed, "Frances Willard" to Dr. Ward on letterhead of National Woman's Christian Temperance Union, President Frances E. Willard. Single sheet, 8-7/16" x 5-3/8", folded in thirds to fit envelope, else fine. Frances Willard (1839-1898), feminist and reformer, distinguished herself as an educator in the early part of her life. By the 1870's, however, she had found her life's work: temperance. Bringing a small prayer-dominated group to the national stage and prodding the WCTU into other causes -- like suffrage and labor reform -- she shaped the group into a strong woman's movement. By 1890, Miss Willard had experience of 10 years in American party politics and was influential in making the Prohibitionists a successful political force. In her autobiography, GLIMPSES OF FIFTY YEARS, she mentions writing for The Independent as early as 1870. The Independent was a New York-based weekly journal of considerable importance in 19th-century America, absorbing Harper's Weekly in 1916. It started in 1848 as a religious journal associated with the Congregationalists. Henry Ward Beecher, editor from 1860-1863 was succeeded by Theodore Tilton (1863-1870) who made it a secular periodical interested in reform -- especially suffrage. Later editors moved the journal in the direction of an interdenominational religious and literary organ, active in political discussion. In this letter, she writes "Dr. Ward" that this "note was not reached - in the heap on my table - until hereaway. I always liked to write for The Independent but felt unwelcome latterly. Reassured by your kind words, will 'try try again' - soon. Dr. Ward may well be Cyrenus Osborne Ward (18311902), author, editor, and labor leader who was strongly connected to the New York Tribune and New York Sun. By 1878 he had set up his own printing office to publish one of his own books as well as assuming the associate editorship of the reform journal, Man. He spent the rest of his life devoted to a political and social agenda of progress and reform -- as did Willard. An interesting letter -- one doesn't often have written documentation of the "Do Everything" Miss Willard letting feelings of unwelcomeness deter her from anything! NAW III, pp. 613-619. Willard, GLIMPSES OF FIFTY YEARS (1889). DAB X, pp. 416-417. (Inventory #: 6485)
$500.00 add to cart or Buy Direct from
Priscilla Juvelis
Share this item