The Grave of Lost Stories 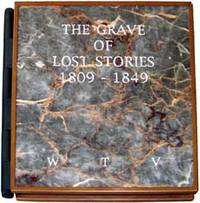 by CoTangent Press. Vollmann, William T.
[Sacramento]: CoTangent Press, 1993. Artist's book, one of 15 deluxe copies only, 13 of which are for sale, all on Johannot paper, each signed and numbered by the artist/author and binder, from an edition of 200 (185 regular edition). Page size: 10-7/8 x 7-7/8 inches. Bound by Ben Pax: steel and grey marble box (tomb) fitted to custom steel hinge by means of a copper sheet riveted to the steel and then crimped upward to form a pan. The hinge is powder-coated black as is the interior. The front cover is incised with the title, author's initials and Poe's dates. The copy number appears in roman numeral on the back cover. Along the foredge of the box (tomb), 13 cow's teeth have been set in handmade silver bezels. The inside covers each have four brass and copper rods (oxidized green). The book itself is bound in boards with linen spine which are "leafed, and variegated and painted in metallic fungoid patterns over which the author has painted a female figure to represent one of the stories (author's description)." The gessoed boards are copper colored and the female is in blue with onlays of four small white bones outlining the skeleton. The book lays into the marble box (tomb). The four illustrations are hand colored by the author who has also made a number of small revisions in the text. The text is letterpress by Alastair Johnston in Electra and Cochin with display in Caslon, Marbleheart, Rimmed Lith and Astoria at Poltroon Press. The title page is printed in three colors, guards of black and gold gilt Japanese paper. The story first appeared in THIRTEEN STORIES AND THIRTEEN EPITAPHS in 1991. This is, however, one of the early artist's books that Mr. Vollmann wrote and illustrated. William T. Vollmann was awarded the National Book Award in 2005 for his novel, EUROPE CENTRAL and in 2007, the American Academy of Arts and Letters Award in Literature. His artist's books are in prominent private collections and several institutions. (Inventory #: 8352)
$5000.00 add to cart or Buy Direct from
Priscilla Juvelis
Share this item